Cheese is something that we all love and enjoy. There are many types, shapes, and sizes that we can not resist.

Emmental Swiss cheese is one of them which is a relatively high-fat cheese that is rich in calcium cheese. It is traditionally made from unpasteurized milk and you can also find it across the border in France, not just in Switzerland. However, what if you are unable to get this cheese and you need something to use in your recipe.

You can substitute Emmental cheese with Gruyere, Fontina, Jarlsberg, French Comte, and Raclette.

Read more on the substitutes, their use, and where they come from. Also, you’ll find some more information on Emmental cheese. Scroll down to find out.

What Is Emmental Cheese?

A type of cheese which production actually dates from the 13th century in the valley of the river Emme in the Swiss. It’s the oldest cheese, which has a Swiss heritage. The process of making requires fresh raw, unpasteurized milk from a cow, with no additives or modifications.

Emmental or also known as Emmentaler and Emmenthaler and the name depends on the local language or dialect that the cheese is used in. Emmental cheese is very smooth with a firm, dense body and a hard, inedible rind. Well, it can range from smooth and buttery to nutty, fruity, and full-flavored cheese.

It is a type of cheese that melts really well and works well in casserole, soups, or just melted in sandwiches. Also, another user will be on your crusty bread with a thin slice of ham or as an appetizer with a light fruity wine like Beaujolais.

You can find Emmental cheese in grocery stores or in a good cheese shop. Actually, you can always order online some of the excellent French and Swiss brands.

Read our list that contains the finest Emmental cheese replacements that will make your meal and recipe even tastier. Read further the article to find out more and get inspired:

A very smooth and melting type of Swiss cheese is the Gruyere. It is also made from cow’s milk and cured for six months and longer. It is a very good table cheese and it can be eaten in slices, on a sandwich, or just as part of a cheese platter. Just like the Emmental cheese, the Gruyere also melts really good and it is used to prepare traditional fondue recipes.

Gruyere is used to make the Croque monsieur which is a classic French grilled cheese sandwich. Additionally, it is a staple ingredient of Parisian bistros everywhere. It is the ideal cheese that will give a nice, creamy ending to your meal.

Fontina, an incredibly rich and creamy cheese that has a sweet and pungent flavor. It has unrevealing tones of butter and roasted nuts which will linger in your plate. It is traditionally made from unpasteurized milk and has a semi-hard texture. It is a very smooth and adorned cheese that has small holes in its body.

The cheese absorbs the naturally filtered moisture from the caverns that give out a distinct aroma and uniqueness to the Fontina. The Italian, Danish and Swedish versions of Fontina are characterized by waxed rings and sweet-savory flavors.

You can use it to add on pizza or to make any delicious topping. This is a creamy cheese that will melt nicely just like the Emmental cheese and fits well in soups, sauces, chowders, and other recipes.

Jarlsberg is a mild, semi-soft cheese made from cow’s milk. It is a cheese that has Norwegian origin and it resembles the Swill Emmental cheese with very distinctive, open holes. The characteristics between the two are very similar and usually, Jarlsberg is said to be Swiss cheese.

It has a sweeter and stronger taste than the Emmentaler. This is a cheese that has a yellow interior and it is very buttery, with a rich texture and mild, nutty flavor.

It melts so well that it fits in sandwiches, fondues and goes on well on hot dishes. It is available in wheels, slices, mins, and random weight pieces.

A fruity and savory flavored cheese that will add a very interesting flavor to your dish is the French Comte. The texture of your dish will be transformed as it will give aromas of roasted hazelnuts and caramelized butter.

It is a very inspiring product and it will work well in a bowl of mac and cheese, veggies, or just folded into a plate of eggs. It is a very firm cheese that can be sliced or grated as needed.

A type of cheese that actually has three meanings: name of a cheese, name of a Swiss dish that includes melted cheese and it is a type of grill that is used to melt the cheese. If you eat Raclette you can expect a joyful, scrape melted cheese on your plate.

Traditionally, a wheel of Raclette cheese is cut in half, heated on fire or grill, and added directly to your dish. You can use it with vegetables, melted, raw, or cooked. Serve it with cured meats as well.

What is Emmental cheese made of?

It is a cheese produced in the central cantons of Switzerland. Made from traditional, unpasteurized cow’s milk. Hard cheese with a thin ring and it is coerced with a paper with the producer’s name on it.

Is Emmental cheese the same as Swiss cheese?

Actually, in the US they have “swiss cheese” that is an imitation of the Emmental Swiss cheese. The main characteristics of the Swiss cheese are mildness and firm texture. The French Emmental has a slightly stronger taste and the Emmental usually stands very well on its own as a snacking cheese.

What is Emmental cheese good for?

This is a type of cheese that has a very good melting potential and can fit any dish that requires melted cheese or fondue. It goes well with grilled cheese sandwiches, pasta, or egg dishes. It can be eaten cold or layered in sandwiches as well. 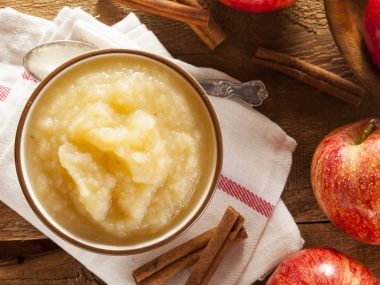 Read More
Apple Sauce is a concentrated type of sauce extracted from the apples itself. It’s famous in America and…
Read More

Read More
Gochugaru is a Korean chili powder that gained popularity worldwide. It’s made of dried chili peppers without seeds and…
Read More