If you are searching for peppers that bring a mild heat to taste buds and still maintains flavor then Anaheim Pepper is the best! When they are raw they are refreshing, bright with a sharp spicy taste. Moreover, the taste doesn’t linger much which makes it ideal for many dishes.

However, what to do if you cannot find Anaheim peppers or want to dry something else? You can use some of the substitutes such as Poblano Pepper, Bell Pepper, Jalapeno Pepper, Hungarian Wax Pepper, Serrano Pepper, or some of the following below.

All of these peppers have their own unique taste and heat to offer in a dish. So, if you want to know more about how they can substitute Anaheim peppers, then read on!

We have compiled a list of the 10 best Anaheim pepper substitutes based on different factors such as overall flavor, availability, and how to use them.

Bell peppers are a very good substitute for Anaheim Pepper when you don’t want heat at all. They are also quite tasty and nutritious.

One of the best things about bell peppers is that they are available all around the world. You can also use them in a variety of ways like for stuffing or in dishes too.

Moreover, they can also be eaten raw or cooked.

Today, bell peppers come in colors like red, yellow, orange, and green. Hence, they can add color to any recipe. As far as nutrition is concerned they are low in calories, rich in vitamin C and other antioxidants. So, they are a healthy option too!

If we have to talk about one Anaheim pepper substitute that provides the same heat and flavor, then Poblano peppers it is! Poblano Pepper originated from Puebla, Mexico, and is an extremely popular chili in Mexico.

Poblano Peppers are mildly spicy and in terms of heat level, they are similar to Anaheim Pepper. They are dark green when raw and after ripening become dark red or brown.

These peppers have thick skin so you can even use them for stuffing as they are good with the oven. Moreover, they are extremely easy to roast, fry, or even dry.

You can use Poblano peppers in the preparation of various sauces. If you want to preserve them, you can also do that after removing their waxy texture. 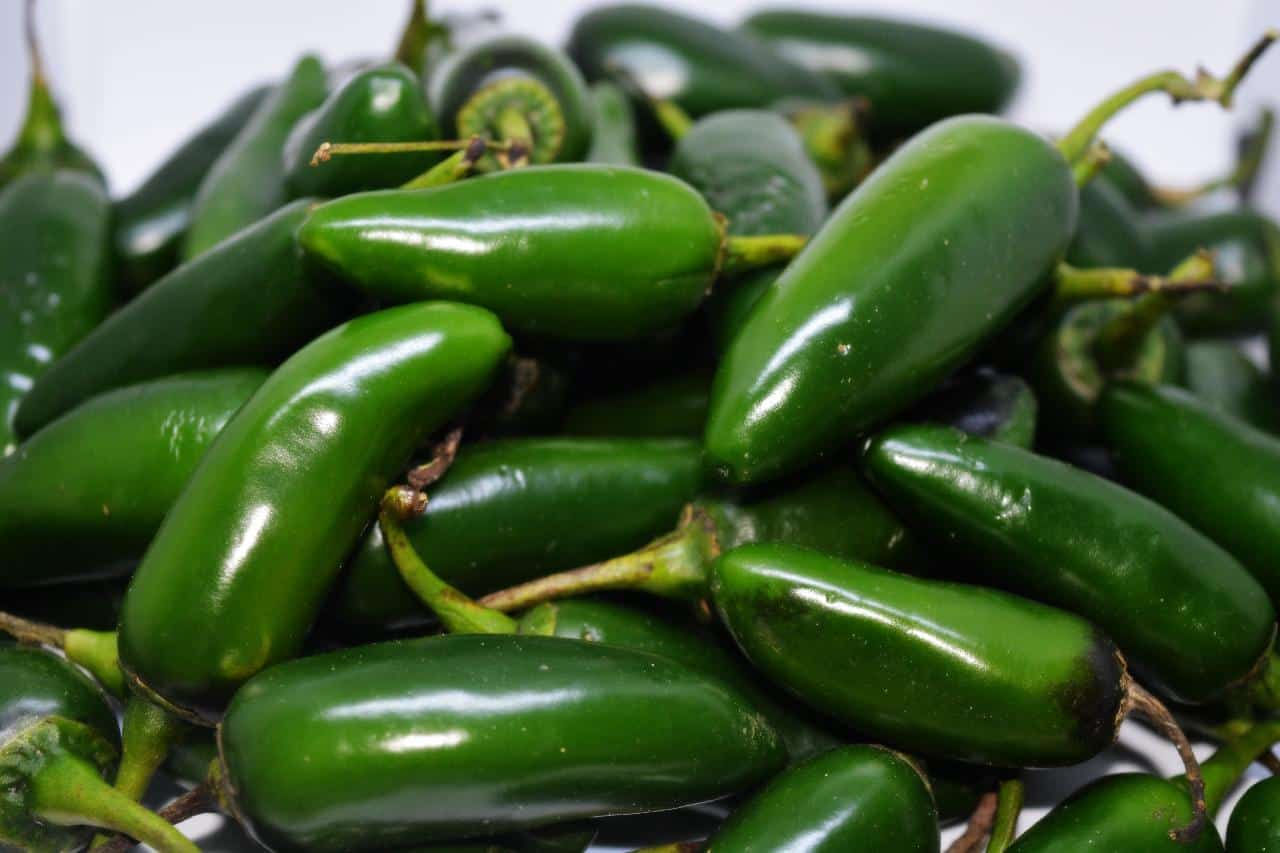 Jalapeno pepper originated in Mexico but now it’s cultivated worldwide. It has a distinct taste and flavor and makes a great Anaheim pepper substitute due to the similar taste and easy availability.

Jalapeno peppers are mild in heat level. When they are green they taste a bit hot but after some time, they turn red and taste a little sweet too!

Talking about their use, you can use it nearly anywhere you want. But keep in mind that this pepper is definitely hotter than Anaheim pepper. However, they can still blend well with various dishes. You can roast them, add them to dishes, or even have them with lemonade. 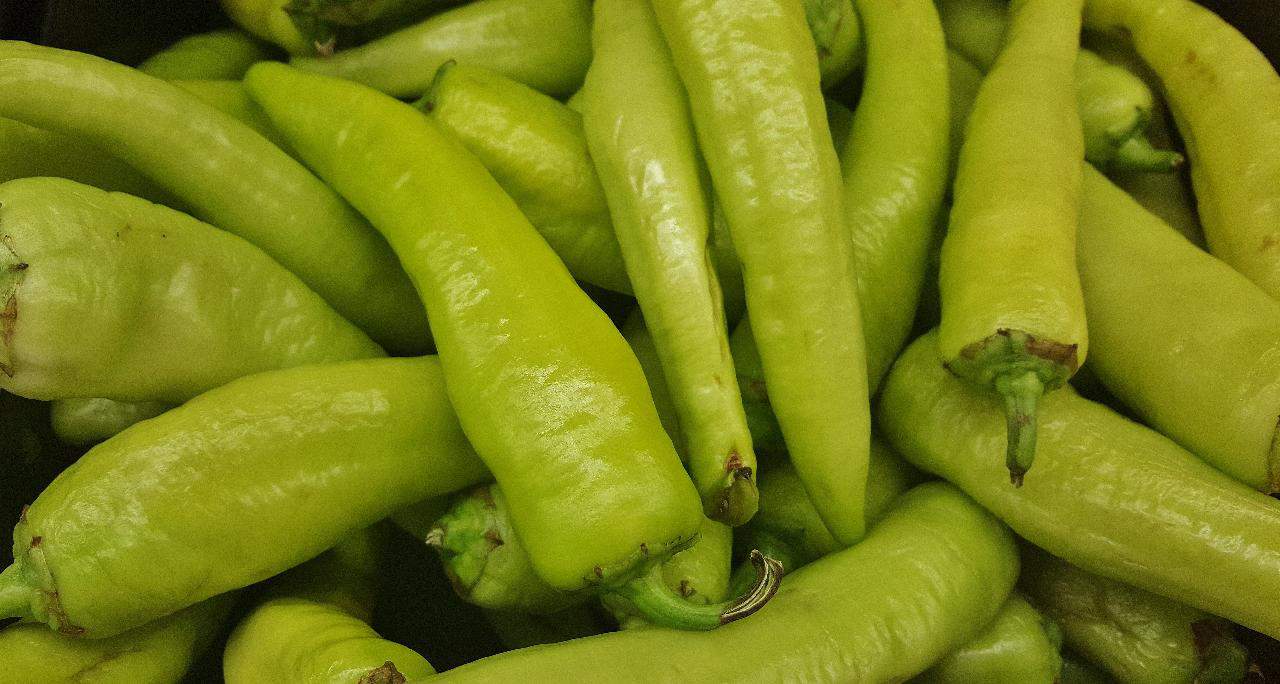 As the name suggests, Hungarian Wax Peppers have originated from Hungary. They make a perfect substitute for Anaheim peppers because they’re versatile.

However, keep in mind that Hungarian Wax Peppers are very spicy (almost 20 times hotter than Anaheim pepper). So, you can imagine the overall heat.

Hence, we recommend this pepper for people having high heat tolerance.

Apart from the heat difference, unlike Anaheim peppers, these Peppers are also slightly tangy in the end. So, you may face this very noticeable difference at the end.

When it comes to usage, Hungarian Wax Peppers work great for stuffing purposes. You can also roast, fry, or pickle them as you like.

Serrano peppers are yet another excellent substitute for Anaheim peppers. They are definitely hotter and spicier than Anaheim peppers but they offer a similar smoky flavor.

Opt for Serrano peppers if you want to prepare salsa or another type of flavoring with it. Moreover, you can also eat them after roasting or seasoning them!

If you want a pepper variety with the same spiciness or heat as that of Anaheim pepper, then Chilaca is suitable.

Chilaca pepper has a heat of around 1000 SHU, which is quite similar to Anaheim pepper. Moreover, it also has a rich, earthy and sweet flavor that we see in Anaheim pepper.

You can use Chilaca pepper for roasting, grilling, and baking instead of Anaheim pepper! 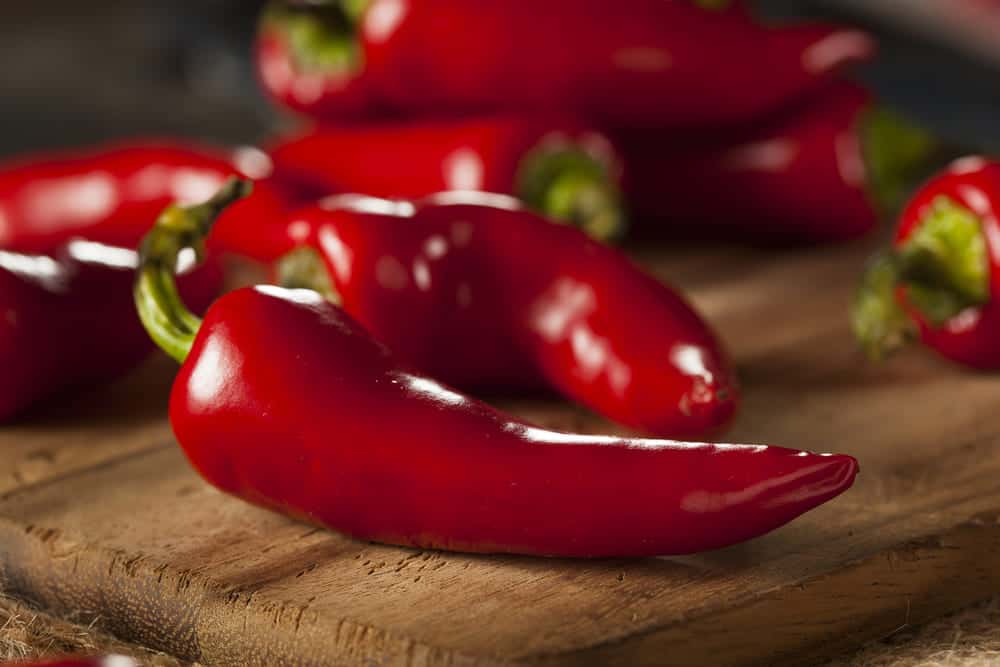 Fresno peppers are quite similar to jalapeno peppers. Hence, you can substitute Anaheim Pepper with Fresno as well.

Fresno peppers are extremely spicy and hot at times, but they still have a fruity and sweet taste. So, they become quite similar to Anaheim peppers in this aspect.

Again, Fresno peppers have more heat than Anaheim peppers, so if you’re looking for a neutral or mild option, check out the other substitutes. 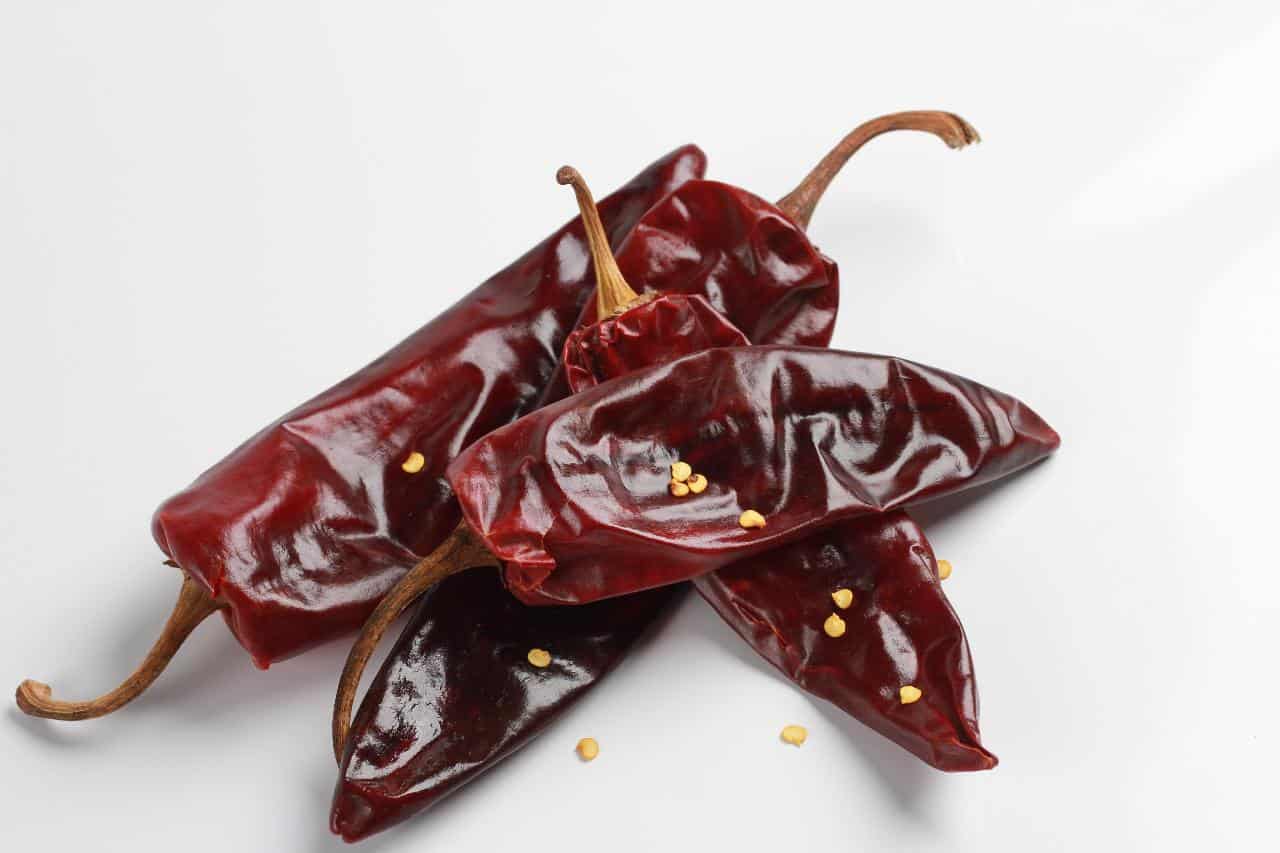 If we talk about Guajillo peppers, then they’re a unique substitute for Anaheim peppers.

These peppers have a uniquely sweet, fruity, and smoky flavor that is a treat for your taste buds. Moreover, they are very similar to Anaheim peppers. First of all, both have a slightly sweet taste. Therefore, you can use both for stuffing and roasting as well.

So, Guajillo Peppers are definitely spicier and hotter in nature.

Shishito Peppers have originated from East Asia and can replaceAnaheim peppers in many dishes. They are mildly hot and hence, they’re spicier than bell peppers.

However, keep in mind that Shishito Peppers deliver a similar flavor as that of Anaheim peppers. But, they are still less spicy and offer less heat compared to Anaheim peppers.

These peppers work best for frying and grilling purposes. However, they can work exceptionally well for stuffing as well. 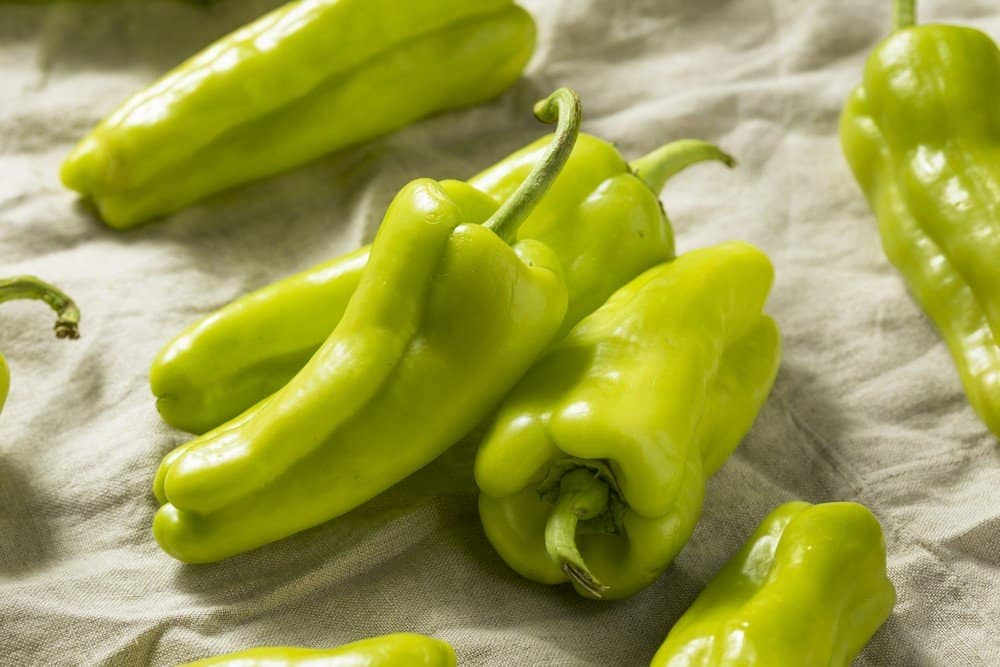 Lastly, if you want a sweeter-tasting pepper with a slight heat, then you can opt for Cubanelle pepper. Both Cubanelle pepper and Anaheim pepper have various similarities.

For instance, both are mild with slight heat. They also have a slight sweetness at the end that resembles Anaheim peppers. When it comes to usage, Cubanelle peppers are perfect for frying as well as stuffing purposes.

So, you can use them in a variety of ways and dishes too.

However, before you choose this as a substitute, keep in mind that Cubanelle peppers are very mild in taste. Hence, they won’t offer as much heat as Anaheim peppers do.

This brings us to the end of the best Anaheim pepper substitutes. You can pick one depending on the heat, your requirements, and the availability of peppers.

Are Poblano and Anaheim peppers the same?

No, they are not the same. Their biggest difference is their appearance.

Anaheim pepper looks more like chili, thin and curved. Poblano, on the other hand, looks like pointier bell pepper.

About the heat, Anaheim pepper is slightly less hot than Poblano peppers.

Is Anaheim pepper the same as Serrano?

Serrano pepper resembles Anaheim but it is milder and changes to orange-red after maturity while Anaheim turns red.

Can you substitute Anaheim peppers for Jalapenos?

Yes, you can use Anaheim peppers instead of Jalapenos. They’re slightly less spicy and hot than jalapenos. However, in many dishes, they can become as hot as jalapenos as well.

Can you substitute Poblano for Anaheim peppers?

Yes, you can substitute Poblano for Anaheim peppers. There are many recipes where you can use them. However, expect some extra heat when you are using Poblano peppers. 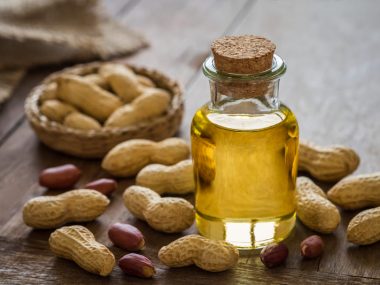 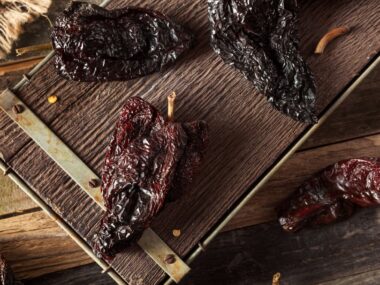 Read More
If you love Mexican food, you definitely like using ancho chili in your dishes. They give food that…
Read More