Cast Iron Sticky After Seasoning: Here’s Why And Prevention Methods!

Seasoning is the best way to keep your cast iron skillet non-stick.

It helps to keep the surface of a skillet rust-free and stain-proof. However, at times the cast iron skillet turns sticky after seasoning. Why is this happening, you ask?

There are 2 reasons why cast iron is sticky after seasoning. You have either used way too much oil in the seasoning. Or you have tried to season the skillet using a cold pan. In this scenario, you will need to clean the skillet and re-season it before cooking anything.

In this post, we will see what you can do if your cast iron skillet is sticky after seasoning and answer some common doubts you might have.

So, stay tuned till the end of the post and clear all your worries!

Should A Cast Iron Skillet Be Sticky After Seasoning?

Generally, a cast iron is non-sticky after seasoning it properly.

The seasoning provides a long-lasting coating to the skillet that prevents the food from getting burnt. However, if your cast iron skillet is sticky even after seasoning, there are two reasons for it.

First, while seasoning you have to add a thin layer of vegetable oil or any other oil to the skillet and then bake it. If you have used too much oil to season the skillet, it will not bake properly and become uneven and sticky.

Additionally, if you use too much oil while cooking, it can make the surface of the skillet sticky and cause a buildup of residue.

Second, if you do not heat the pan enough and start cooking on it, it will create a sticky surface as well. Just imagine how adding cold oil to a cold pan could make a sticky residue on the pan and affect your cooking.

How Do I Get The Sticky Residue Off My Cast Iron Skillet?

If you are cooking food on an already sticky pan, there is no doubt that there will be a buildup of sticky residue over time.

So, what can you do to get the sticky residue off the cast iron skillet? Let us see the 4 best ways to remove different types of residue from the skillet easily.

1. The Residue Is Mild

If the residue is because the seasoning was uneven the first time, gently clean the pan and re-season it. So, here is how you do it:

2. The Residue Is Slightly More

If the residue is slightly more than the last case, follow the steps given below and clean your pan:

3. There Is a Buildup Of Residue

If you continue using the uneven or poorly seasoned pan for cooking purposes, there will be a huge build-up of sticky residue.

Although it becomes hard to clean it as time passes by, it is never impossible. Just follow the steps below and see for yourself:

4. There Is Rust On The Pan

If you see orange portions on your pan, there is rust build-up on your pan or skillet. The steps mentioned below can help you solve this problem:

Can I Cook With Sticky Cast Iron?

You can cook with sticky cast iron, however, you do not want to do that as it is not ideal. Basically, when you cook food on a sticky pan or skillet, your food will cook but it will also stick to the pan.

It will just increase the buildup of residue over time. The more the residue on the pan, the harder it will be for you to clean it before using it again. Over time, the condition of your skillet would not remain as good as it should be. But, this is not it.

The main thing is cooking with a sticky iron cast will worsen the taste of your food. There are two reasons for it. First, the sticky residue buildup, and second, rusting of iron.

Without good seasoning, there will be no protective layer on iron. As a result, it will interact with the air and moisture present around. Thus, a layer of rust might form on the pan.

Although rust is not harmful to your health, it will make sure your food doesn’t taste like it used to. So, all in all, refrain from cooking with a sticky cast iron skillet.

How To Make Your Cast Iron Skillet Not Sticky?

To make your cast iron skillet non-sticky, you need to season the skillet perfectly. After talking so much about seasoning, let us finally see how you can do it.

Before starting anything, it is important to clean the skillet nicely to remove any dirt or germs. So, scrub your skillet with soapy water.

Ensure that the water is slightly warm. Then, keep it on the kitchen counter to dry. You can use a towel as well to dry the pan. Lastly, place the skillet on a gas flame to remove any leftover water. It will also expand the pores of the pan.

Rub A Thin Layer Of Oil

Once you have removed the skillet from flame, take a lint-free cloth and rub a thin layer of oil all over the skillet including its handles. Buff the oil thoroughly with the cloth so that there isn’t any excess oil on the pan.

Excess oil can accumulate at one corner of the pan. While you may not realize it at this step, you will see that after seasoning. There will be an uneven surface with all the excess oil.

Tip: Although you can use any oil for seasoning, we would recommend flaxseed oil, canola oil, or grapeseed oil. All these oils have a good fat content that is important for seasoning.

Heat The Pan In An Oven

Preheat the oven to 450°F and put the oiled skillet in it for 30-40 minutes. Using an oven is the most effective way to season as the oven gives even heat that sets the oil uniformly.

Tip: Put a baking sheet or parchment paper under the skillet and turn the skillet upside down. If at all there is any excess oil still left, it will flow and fall on the baking sheet.

After taking out the pan from the oven after half an hour, repeat the steps 3 more times to get the perfect even seasoning. Let the pan cool down. Finally, it is ready for cooking now!

Uneven seasoning in a pan makes it look patchy. It means that when you look at the skillet, you will see there are some parts that are black and shiny. Other parts are dull and gray.

Also, when you touch the surface, you will feel the gray parts are rough and raised, whereas the black parts are shiny. Thus, there will be no uniformity in the skillet.

In order for your pan to remain in excellent condition for years, it is vital to fix the uneven seasoning of the cast iron skillet. So, let us see how you can fix it.

If your pain is fairly smooth and shiny and there are mild patches, it is most likely because you have not seasoned it adequately a number of times. Thus, all you have to do is season it again.

The right way is to season a cast-iron skillet 3-4 times so that you are able to make a final and smooth layer of oil on the surface. Do it back to back to prevent mild patches.

However, if your skillet is fairly patchy and uneven, you can clean it by scouring the pan with a scrapper. This will remove all the uneven and improper seasoning residue.

Once you are done, wash the pan with dishwashing soap and water. Let it dry. Then, clean it with a towel. Now, again season the pan to get the perfect layer of oil this time.

Tip: To prevent uneven seasoning for the second time, use flaxseed oil. It creates a stable and durable surface. It also has a very low smoking point and unsaturated fats that help with the process of seasoning. 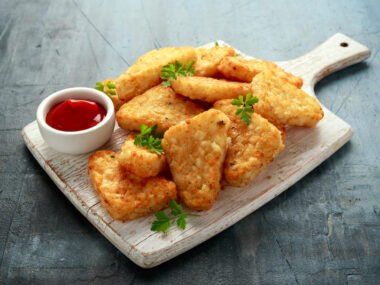 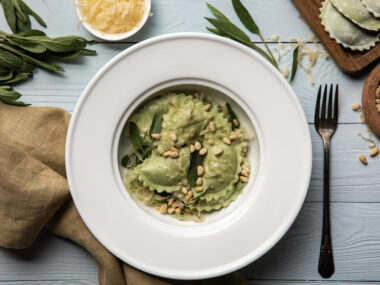 Read More
Sage is a perennial herb that belongs to the Mediterranean region and originated there. It can be easily…
Read More