Corn flour is no stranger in every household’s kitchen. Cooks rely on it for cooking and baking. I usually use corn flour for breading my meats as it gives a savory crunch to fried dishes. Other than that, it’s a perfect thickener for stews and soups without adding too much flavor.

However, sometimes, running out of cornflour happens and what can we do about it? It’s good to know that there are good corn flour substitutes available in the market to save the day.

The best substitutes for corn flour are cornstarch, rice flour, wheat flour, potato flour, all-purpose flour, or some of the following products.

Let’s discuss how these substitutes can perfectly replace your regular Corn Flour when cooking.

The following ingredients can successfully replace cornflour. So, take your pick and save your recipe. 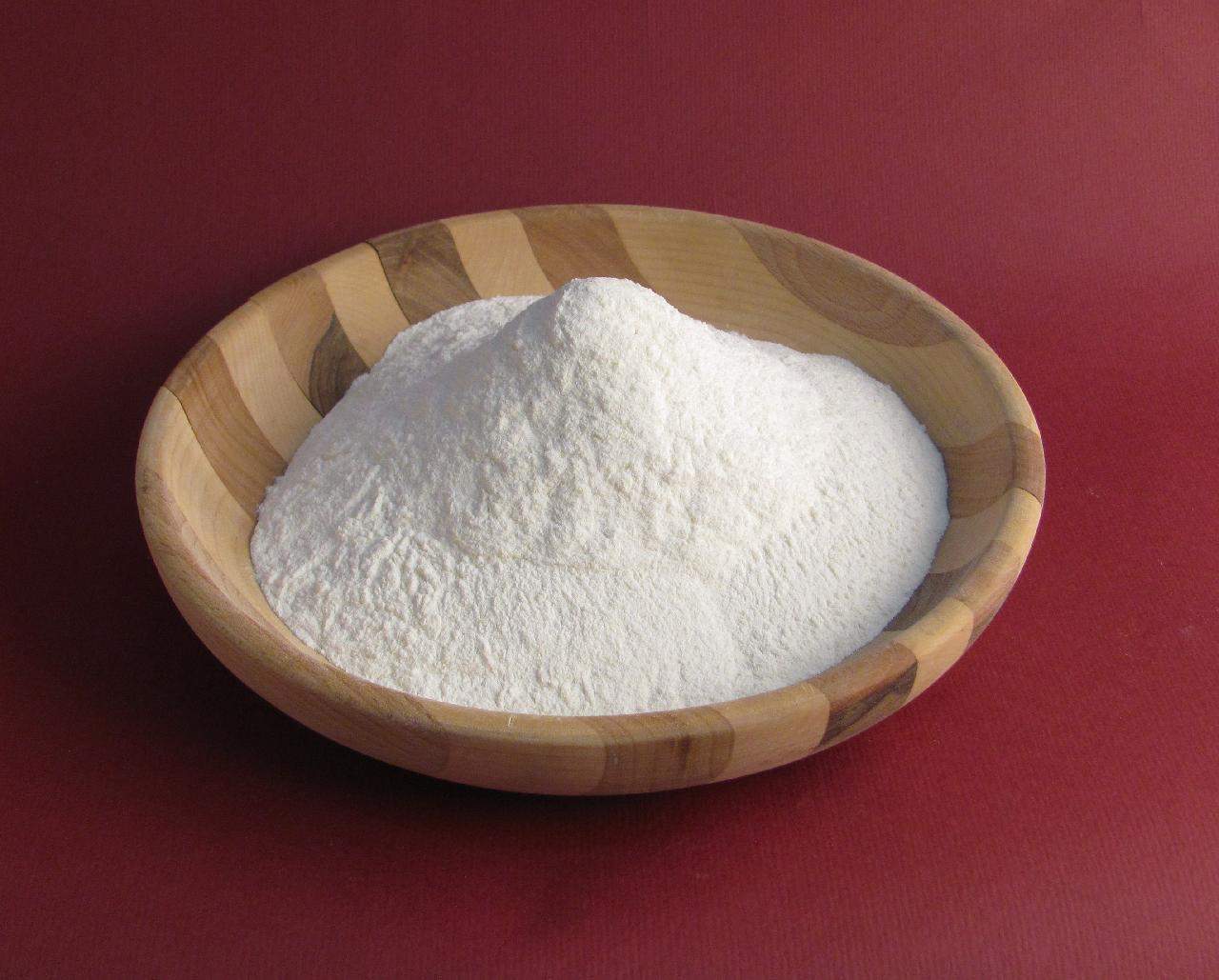 First of all, let’s differentiate cornflour and cornstarch. Corn flour is quite yellow in color, denser, and a little bit grainy in texture, whereas Cornstarch is the starchy part of a corn kernel which results in a white powdery texture.

Don’t be confused when trying to buy those in the grocery stores. It’s all about the label. If the label says corn flour, then it’s cornflour and not cornstarch.

Also when substituting it from one another, it’s important to note that both cannot serve the same purpose in some dishes.

Corn flour does not have gluten which makes some bread crumble and dense whereas cornstarch is more common as a thickening agent for dishes.

To stick with your “gluten-free” diet, you may use cornstarch when you’re out of cornflour as a breading for your fried dishes. The ratio is still the same 1:1, however, when mixing cornstarch, you need to use cold water to dilute it properly.

One of the common substitutes that I can also recommend is Rice Flour. This flour is widely used in Asian culture as the main ingredient for noodles, soups, and even desserts. It’s extracted from finely ground rice until a fine white starch is produced.

It’s also gluten-free, perfect for individuals who are trying to stay away from any high gluten dishes. Unlike cornstarch, rice flour can be diluted with either hot or cold water.

On top of that, rice flour is colorless when mixed with water, unlike corn flour. So you won’t have to worry when mixing it to clear soups or broth.

To achieve the same consistency as corn flour, you’ll need 2 tbsps of rice flour to replace 1 tbsp of cornflour.

You may apply this method especially when thickening soups. I don’t recommend it for deep frying since it doesn’t offer the same crunch as to how cornflour does. 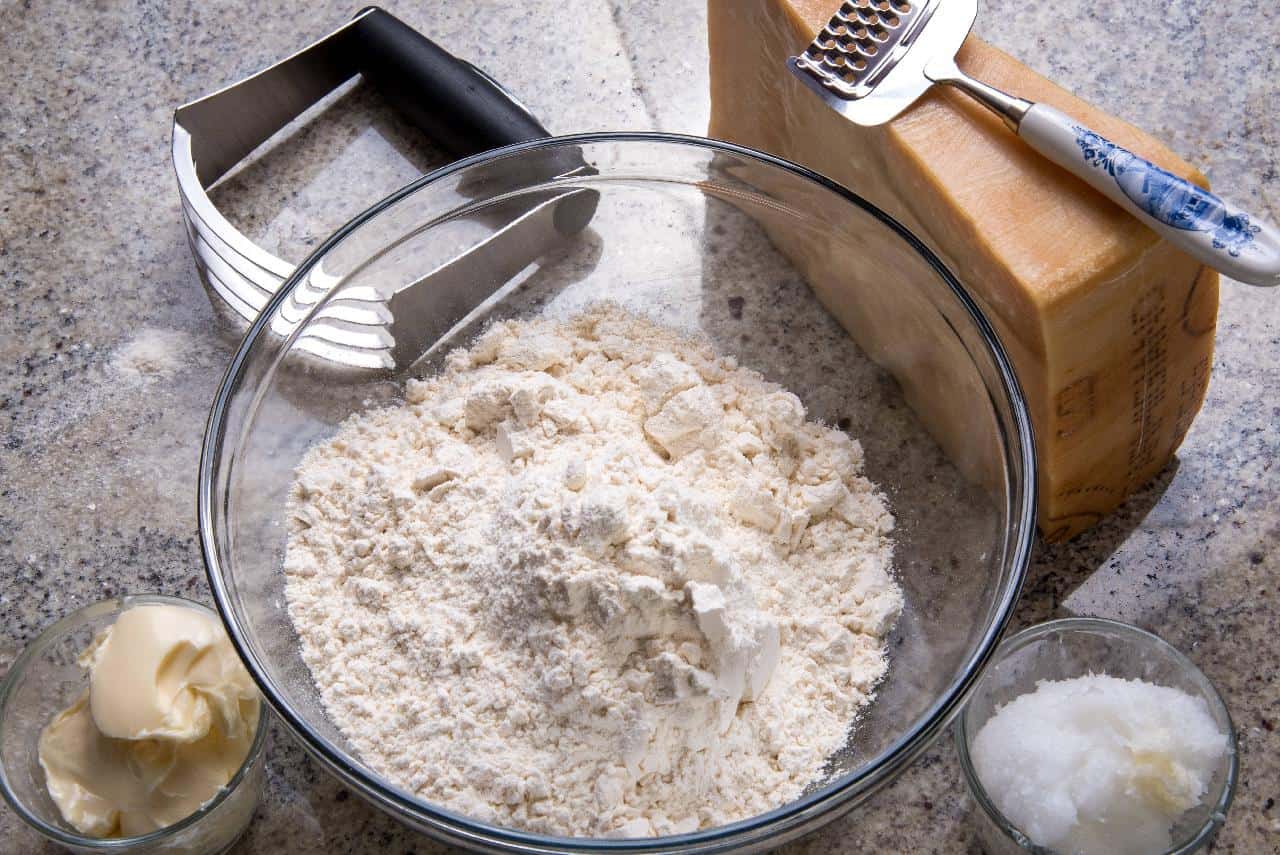 Wheat Flour comes from finely grounded wheat. It contains a generous amount of protein and fiber, making it a nutrient-dense superfood. The only thing is that it contains gluten, so if you have celiac disease, you might not want to consider this alternative.

Since it’s whole grain, you’ll need to double the ratio to replace it over cornflour. 2 tbsps of wheat flour can replace 1 tbsp of cornflour when thickening soups and stews. Use cold water to make a paste to avoid forming lumps in your soups. 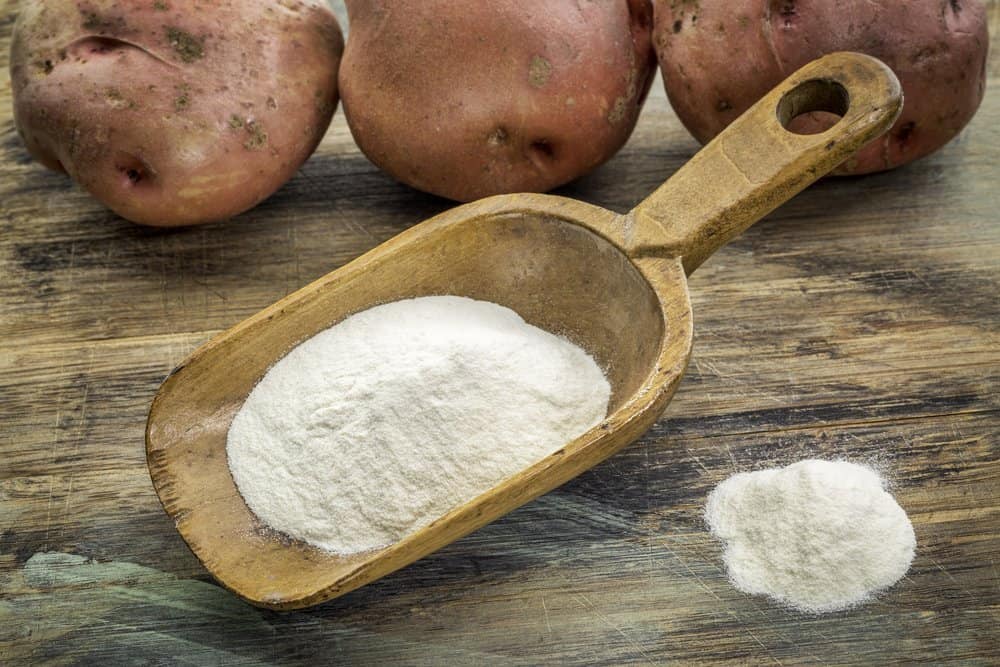 Potato Flour is made out of fresh crushed potatoes then dried to produce that white starch. Unlike wheat, potato is not a whole grain so it does not contain any gluten.

For calorie-conscious folks, they need to handle this starch in moderation as it contains high carbs and fats.

Note that tubers like potato absorbs a lot of water. So when trying to use them as a thickening agent for soups and stews, add them later in the cooking process. The soup might get too thick when added earlier. Also, heating it for too long may cause it to break down and lose its thickening capabilities.

You can substitute 1 tbsps of potato flour over 1 tbsps of cornflour when thickening your soups. Potato flour also works well for breading meats and veggies as it adds flavor to the dish. 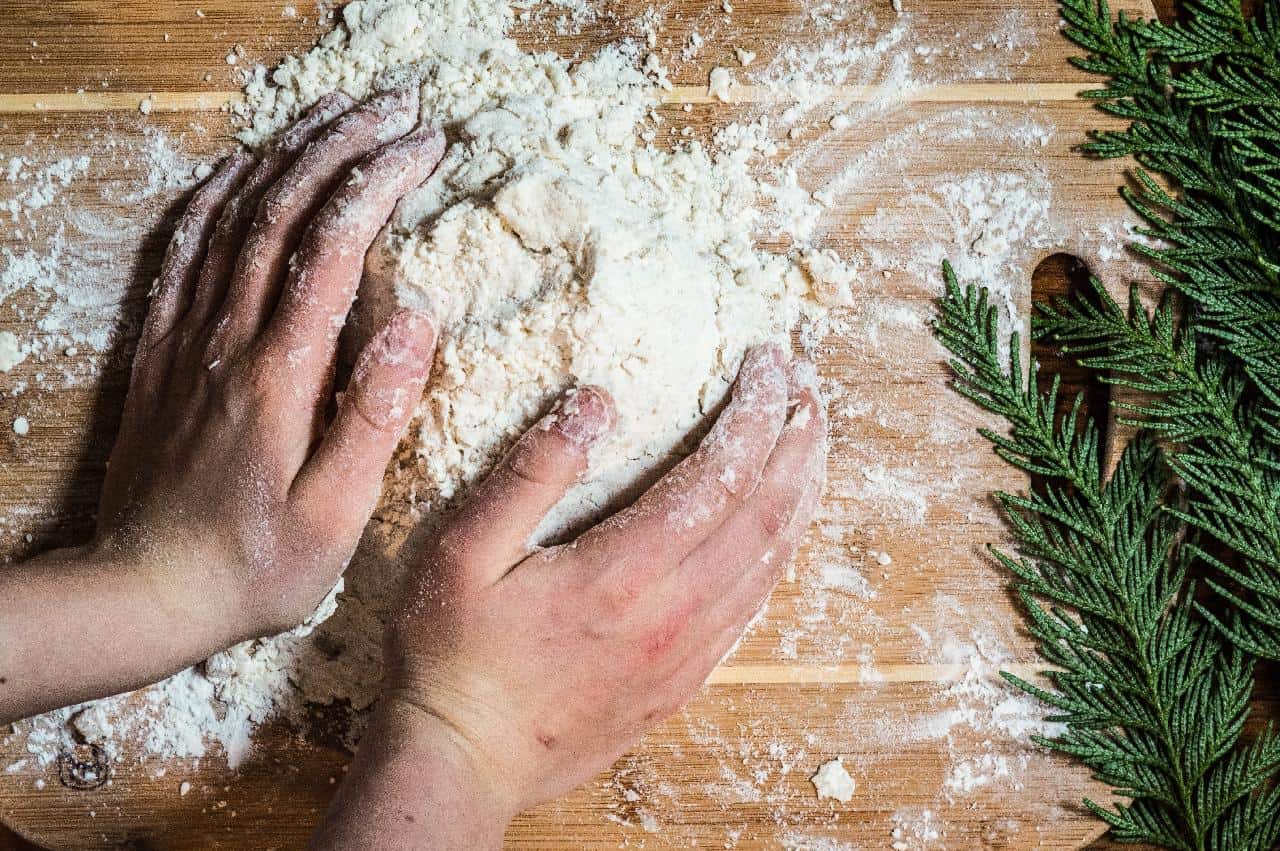 All-purpose flour is quite common for baking goods like bread and pastries. That’s why this alternative made it on the list as it’s impossible to not have this in every kitchen.

All-purpose flour actually comes from wheat grains after the brown coating has been removed. It’s white in color since it’s highly refined.

All-purpose flour can be used in deep frying and as a thickening agent for soups. The taste and texture vary when using it as a coat for fried dishes. The dish will taste chewier and thicker compared to the light and crispier effect from corn flours.

When thickening soups, you’ll need to double the quantity to replace it with cornflour. 2 tbsps of all-purpose flour can make up for 1 tbsp of cornflour.

Self-rising flour is made of all-purpose flour, baking powder, and salt. It is usually used for making quick bread and biscuits.

Tapioca flour is usually used in stews, soups, sauces, gravies, baked goods, and many other sweet and savory recipes. 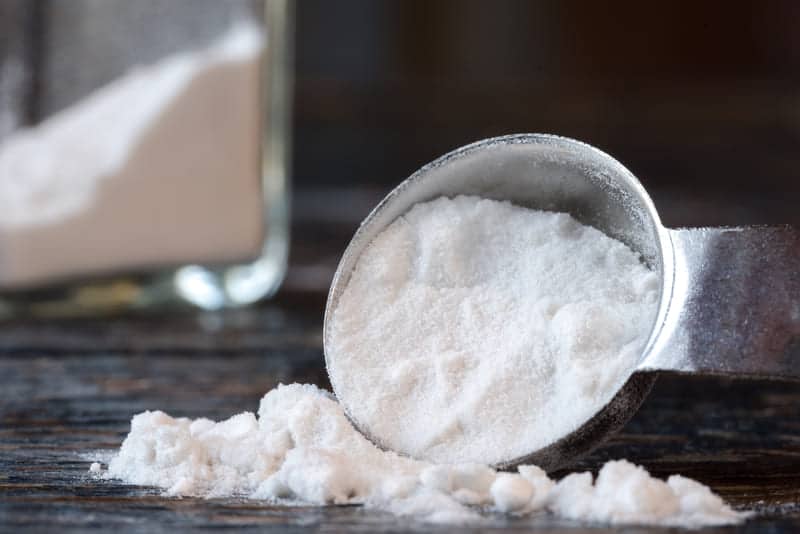 Arrowroot powder can be also used as a substitute for corn flour. It is used to coat meat and tofu before frying and as a thickener in sauces, gravies, soups, fruit fillings, jellies, and non-dairy desserts.

If you are using arrowroot powder as a thickener you need to mix it with water to make a slurry and add it at the end of the cooking time.

Because if you add it directly to the sauce or soup it will clump and not combine with the other ingredients. You can substitute one tablespoon of cornflour with two tablespoons of arrowroot powder. 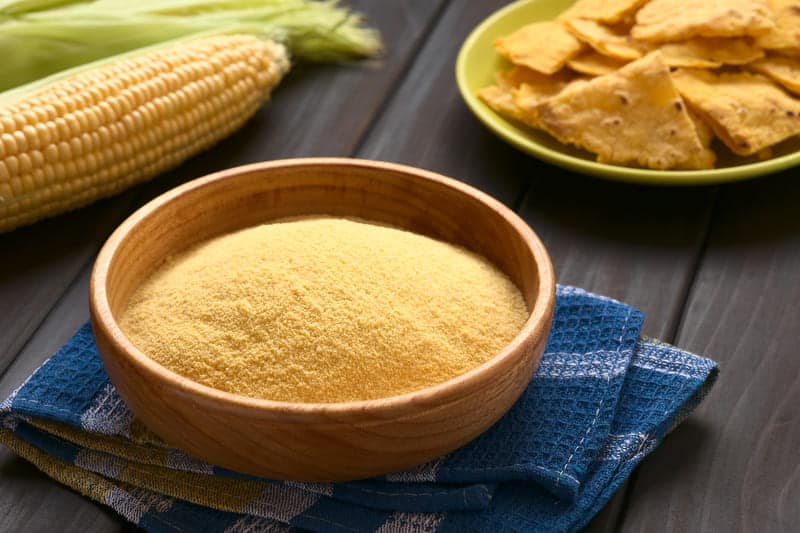 Cornmeal is ground corn with a fine or coarse texture. Corn flour and cornmeal are both corn products, but they have a different texture because corn flour is finely grounded than cornmeal.

Therefore, if you are using cornmeal as a substitute for corn flour you need to use fine ground cornmeal. Substitute cornflour with finely ground cornmeal in a 1:1 ratio in your baking and cooking recipes. 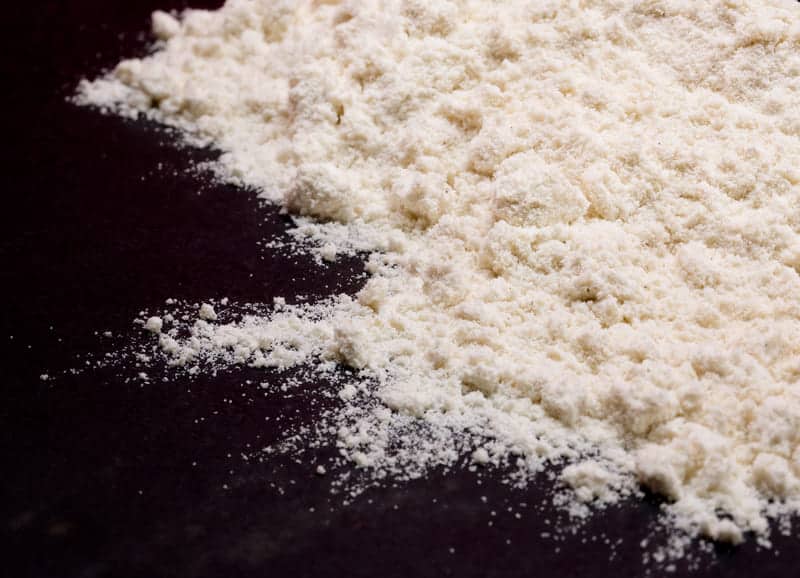 Masa harina is a dried, ground dough made of corn kernels that wore soaked in calcium hydroxide and ground before being used for its production.

It is a staple ingredient in many Mexican recipes like tortillas, gorditas, and tamales. Masa harina has a fine texture a nutty slightly tangy flavor and you can make a dough just by adding water.

You can use it as a substitute for cornflour mixed with some other type of flour in baked goods, and as a thickener in sauces, soups, and stews.

Just mix it with water to make a slurry and add it to the dish you are preparing to prevent it from lumping. Your recipes will have a different nutty and slightly tangy flavor. Substitute cornflour with masa harina in a 1:1 ratio and add more if needed.

Sorghum flour has a sweet, mild flavor and is usually combined with other flour in bread, cakes, cookies, and other baked goods.

You can use this gluten-free flour as a substitute for corn flour in your baked goods and as a thickener in sauces, stews, and soups.

If you are using sorghum flour in baked goods it is best to combine it with other gluten-free flour and add a binder to get a better texture. Substitute cornflour with sorghum flour in a 1:1 ratio.

Ground flaxseeds are also one of the ingredients that can be used as a substitute for corn flour. These small brown or yellow in color seeds have a nutty flavor and can be used as a thickener in your dishes.

If you don’t have corn flour some of the best alternatives you can use for frying are potato flour, cornstarch, or self-rising flour.

They will make your food nice and crispy. If you are using self-rising flour have in mind that it contains baking powder and salt, and they can make your food saltier and fluffier.

There are many different substitutes you can use instead of cornflour for thickening. You can use corn starch, rice flour, wheat flour, all-purpose flour, tapioca flour, masa harina, sorghum flour, and ground flaxseeds.

Substitute For Corn Flour In Biscuits

You can substitute cornflour in biscuits with some other type of flour like all-purpose flour, self-rising flour, or wheat flour. Your biscuits will have a  different flavor and texture but they will be tasty anyway.

Substitute For Corn Flour In Manchurian

Corn flour is one of the ingredients in the Manchurian dish. But if you don’t have corn flour you can use gram flour, or a type of white wheat flour called maida.

Gram flour is a type of flour made from ground chickpea. While Maida is Indian refined and starchy flour similar to the cake flour. Maida flour is also one of the ingredients used in the Manchurian dish. T

Therefore, you can add more as a substitute for corn flour both to prepare the Manchurian balls and as a thickener for the sauce.

Can I Use Plain Flour Instead Of Corn Flour?

Plain or all-purpose flour is a good substitute for corn flour in your recipes. You can use it as a thickener, in baked goods, and as a coating for fried food.

The texture and the flavor of the final products will be different compared to the texture and flavor when corn flour is used. You can substitute 1 tablespoon of cornflour with 2 tablespoons of plain flour in your recipes.

I actually have a tie, I would go for Cornstarch and Potato Flour.

I’m a fan of deep-fried dishes. When frying meats and veggies, I usually go for cornstarch or potato flour. Both are light which makes them perfect for breading and frying.

It also adds flavor to fried dishes, so I don’t need to add much salt and spices. The texture is airy and crunchy, one of the “must-haves” when making fried dishes.

For soups and stews, both work well. The cornstarch is an easy fix since you can add it whenever you want. Plus, it can be diluted with cold water.

Potato flour is the best thickening agent because of its capability to absorb water. I just handle this with more caution since it easily breaks down whenever boiled for a long time.

For baking, I don’t really recommend both of them as it doesn’t serve the same purpose as how “the good old all purpose-flour” does. I would still stick to all-purpose or wheat flour when baking. I rarely use cornflour as well when baking since it’s denser. I only use them for cornbreads or corn tortillas.

There you have it! We hope we gave some light to your cornflour concerns and may these substitutes help you in the future the next time you run out of cornflour. 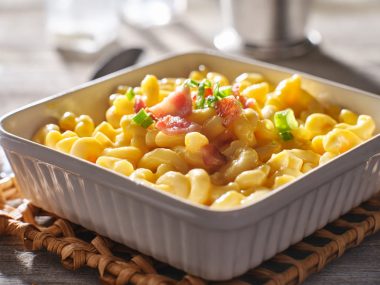 Read More
I mean, who doesn’t love mac and cheese? That’s arguably one of the most favorite childhood dishes that…
Read More 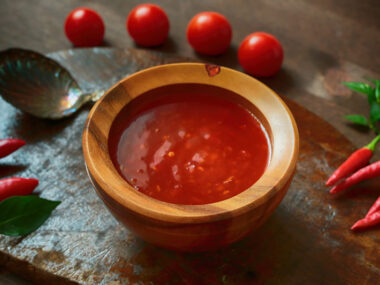 Read More
Sweet chili sauce is a popular Thai sauce that plays a key role in many different recipes. It…
Read More