Difference Between Muffin and Cupcake

Both cupcakes and muffins are delicious and they can come in a variety of types. You can add whatever flavors you want to these deserts and astonish your guests with a very tasty treat. But are muffins and cupcakes the same or there are certain differences between these two sweet dishes?

First, you have to know that you are not the only one asking yourself this question. Many people are confused when it comes to the difference between cupcakes and muffins. So, let’s clarify this once and for all!

What’s the Difference between muffin and cupcake? Muffins have a denser texture and they are not as sweet as cupcakes. On the other hand, cupcakes are like mini cakes being overloaded with sugar and cream.

The flavor difference stays in the filling which would be fruits or candy for muffins while it would be vanilla, chocolate or caramel for cupcakes. But let’s look deeper at these differences and see which one you prefer by the end of this analysis!

Differences between a cupcake and a muffin

As we gave you a brief idea about the main differences between these two dishes, we should take a deeper look at them. So, here are the most important differences that you should consider before choosing which one you want to bake!

One of the reasons cupcakes are so popular is the icing on top of them. These little cakes are covered in different icings such as vanilla, chocolate, caramel, or any other flavor. In some recipes, you will find this icing inside the cupcake as well, in the form of a filling.

Muffins’ strong point is not the icing though, but rather the filling. People tend to enjoy muffins because they are filled with chunks of fruits or candy and they resemble a regular cookie. While there is no icing on the muffins, the truth is that such a glaze wouldn’t even go well with the texture of the dough.

When it comes to dough we have bread dough and we have cake dough. Cupcakes are exactly like cakes, from the batter they are made of to the icing they are covered with. At the same time, muffins taste and look more like bread.

This is a major difference between cupcakes and muffins. It is also the reason why muffins could make for a delicious breakfast while cupcakes are more like an occasional dessert.

Muffins are healthier than cupcakes

This aspect depends a lot on the recipe you use when you make your muffins, but generally speaking, they are more nutritious. 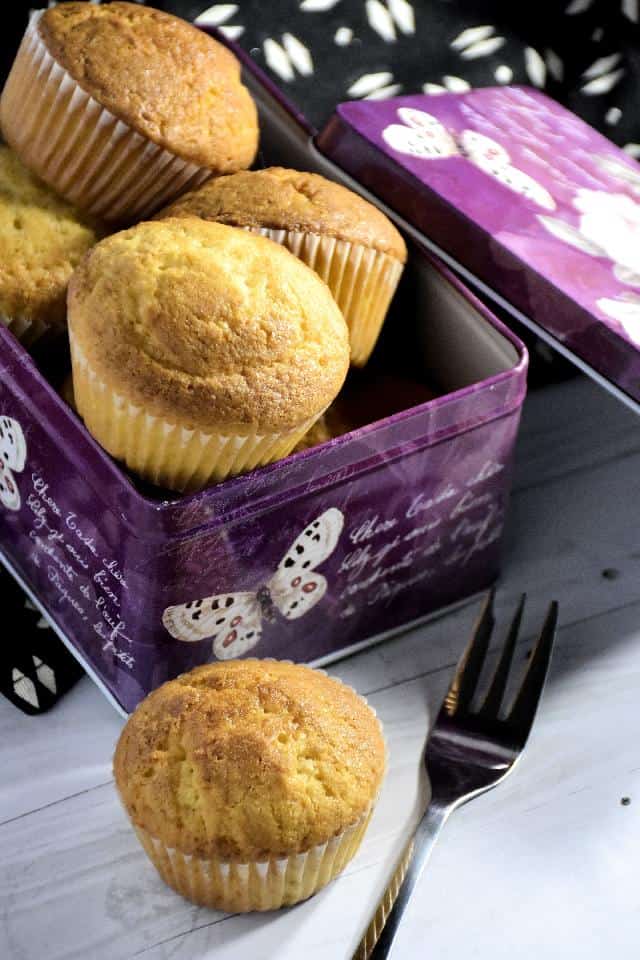 Muffins also have fewer calories than cupcakes and tend to be more filling, especially if you add your favorite fruits to them. Plus, you can make them vegan if you want, which would be a challenge for cupcakes.

Even if you would bake both the muffins and the cupcakes in a similar way, preparing the dough tends to be more complicated for cupcakes.

The reason for that is the fact that you will have to also prepare a buttercream. If you are making muffins, all you need is to mix the ingredients and bake the muffins.

When for cupcakes you need to make the batter, bake the cupcakes, and prepare the filling or icing separately.

We have to state right from the start that muffins are considered the healthier option to cupcakes.

Muffins are a healthy choice for a breakfast snack but cupcakes would just overload such a meal with extra calories. These two treats are quite different in terms of ingredients, which is why they bring different nutritional values as well.

The main nutritional advantage that muffins have compared to cupcakes, is the flour they contain. Cupcakes are typically made of white flour that is also used in cakes, so they can be fluffier and tastier.

Muffins contain wheat or oat flour which is considered to be a much healthier choice. Of course, you can use any flour for your muffins, but the classic recipes call for wheat or oat flours and sometimes soy flour can also be a good choice.

Cupcakes require quite a bit of butter. This butter adds a lot of fats and calories to the final cupcake and it wouldn’t be healthy to eat it on a daily basis.

On the other hand, muffins will turn out just fine if you replace this significant amount of butter with vegetable oil.

Keep in mind that butter and eggs are the main ingredients that make your cupcakes fluffy and tasty, besides sugar. So, if you want to avoid such ingredients or if you are a vegan, going for muffins without eggs instead of cupcakes is a great choice.

The filling sets the nutritional value as well

Muffins are generally known for their fruit filling or candy filling. These fillings come usually in the form of chunks. If you want to go for a healthy recipe, you can also use chunks of different fruits to add a specific flavor to your muffins.

When it comes to cupcakes, the filling is most often than not a cream. It could be vanilla, chocolate, caramel, or a mix of these flavors.

So besides the fact that you will have to prepare the cream separately, you will also eat a lot more sugar. This type of fillings takes many points off the nutritional value of cupcakes.

Best recipes of muffins and cupcakes

If you are tempted to try these delicious treats, you have to use the best recipes. A muffin as well as a cupcake can taste very different according to the ingredients you use. As you can imagine, there are some common ingredients that you will need for all muffins and cupcakes.

Some of these main ingredients include a type of flour, sugar or sweetener, and different fillings. Here are two very tasty recipes that you can try right away as they are easy to cook and everyone will love them!

To make muffins you will need the following ingredients. (The quantities differ from one recipe to another so you might want to adjust that)

Beat the two eggs using a manual whisk or a mixer. You will get better results with an electric mixer but it works just fine either way.

Add your vegetable oil as well as the milk to the eggs and keep mixing. When you get a homogeneous mix you can add the sugar gradually as you keep mixing the composition. You should mix everything until you obtain a smooth batter.

Start stiffing in the batter then flour, also gradually. You will add the salt and baking soda here as well. Make sure the flour is well incorporated with all the ingredients before you add the filling.

Prepare your chopped fruits or chocolate chips, or any other filling you are using and start adding it to your batter. Do not use the mixer for this step as you will smash the chunks and you want to keep them whole.

Add the batter to the muffin cases. Don’t fill the cases all the way up as they will grow in the oven. You should add about two-thirds of the batter in each case. Let them bake for about 20 to 25 minutes.

Take the muffins out of the oven and give them some minutes to cool down before you enjoy their delicious taste! Serve them as a snack between two meals or as a breakfast meal by themselves. 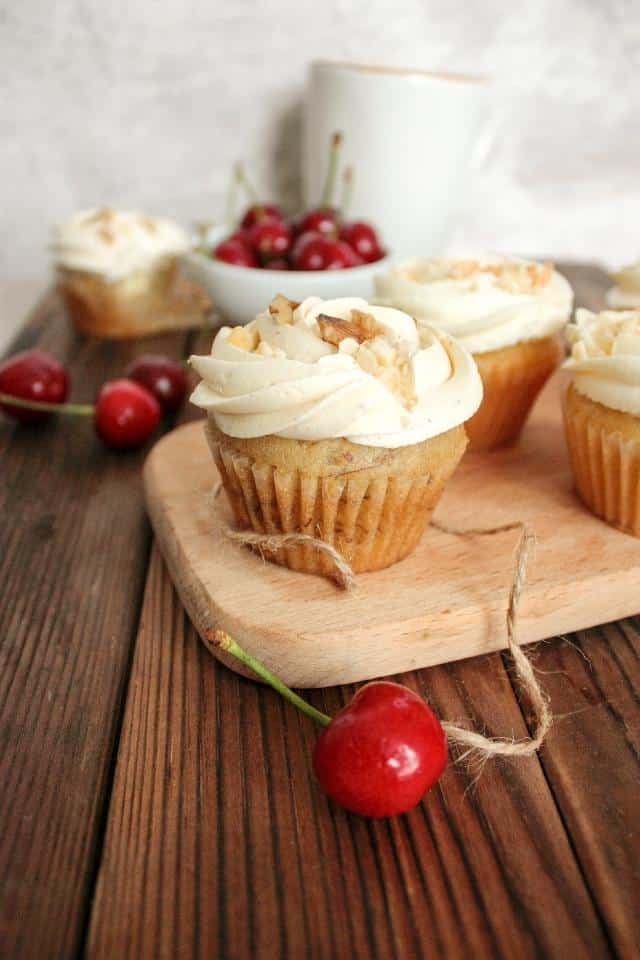 Just like in the muffin recipe, the following ingredients you would use for cupcakes can be modified according to the quantity you want to obtain.

Unlike the batter for the muffins, in this case, you should use an electric whisk for better results. Start by mixing the butter with the sugar and beat them until you obtain a smooth cream.

Add the two eggs to the mix and keep beating the composition until they are well incorporated too.

Keep adding the rest of the ingredients such as the vanilla, the flour, salt and mix them all together. You shouldn’t have to mix the ingredients for more than a couple of minutes if you use an electric mixer.

Fill the cupcakes cases with the batter you obtain. let it bake for about 15 to 20 minutes before you pull them out of the oven.

Now, you will have to prepare the buttercream. Mix the butter with the sugar until you obtain a soft creamy texture. Add the sugar, vanilla extract, and salt into the mix and use the whisk until it is incorporated completely. To the final mix, add about three tsp of milk of your choice to make it softer. The last ingredient you should add is the food coloring if you decide to use such a product.

When your cupcakes are cool enough, cover them with the buttercream. You can also use a cooking pistol to fill them with this cream for a more rich taste. Serve them on occasions or if you want to enjoy a tasty dessert.

Is a cupcake a muffin with icing?

There are many other differences between a muffin and a cupcake than just the icing. Generally, yes the icing on top of the cupcake makes it unique but the ingredients, as well as the texture of the dough, are also different.

Is a muffin bread or cake?

Why is a muffin called a muffin?

The word “muffin” has quite an interesting history. It comes from German,” muffen” which means “little cakes”. Before the 19th century, muffins were sold by private bakers in England from door to door as most people didn’t own an oven. They became popular fast and once people could bake their own, everyone started to create their own version of these delicious treats.

While both muffins and cupcakes are delicious in their own way, you should consider the differences in this guide before choosing to bake one or the other. Keep in mind that muffins can turn out to make a tasty and healthy breakfast while cupcakes are higher in calories and sugar.

Ultimately, what you prefer is up to you and you can’t go wrong with either of these treats! Follow the recipes in this guide to make sure you obtain the best muffins or cupcakes in less than half an hour! Astonish your guests with some delicious muffins or cupcakes every time you want as they are easy to make! 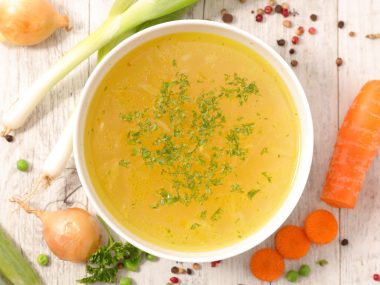 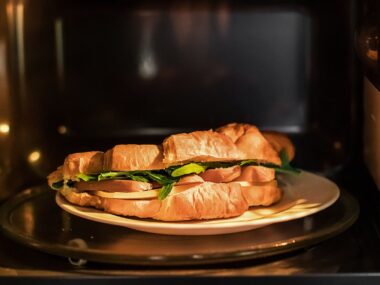 Read More
I don’t want to eat a cold sandwich. And I guess you don’t want nether. So, if you…
Read More