How To Make Chicken Broth With Bouillon in 3 Easy Steps

When it comes to winters and keeping healthy, chicken broth can be your best option for a meal. It helps better your skin and joints and also improves your gut health.

There are many vitamins, minerals, and amino acids in chicken broth, making it an overall healthy addition to your meal plan.

Not everyone has the time to go about the lengthy process of gathering ingredients and boiling a whole broth for frequent meals. However, there is a solution to it – bouillon!

Bouillon is like the instant noodles of soup! It is easy to make and eat. It is, however, much healthier than them and has many health benefits. The following article shall cover how to use this product to make amazing chicken broth easily.

Bouillon is typically referred to as the mix made by dehydrating stock or broth or the dish that is made out of it. They have been around for many years and are often used to flavor soups, sauces, casseroles, and other dishes.

Dehydrated chicken stock or veggies (depending on whether it is veg/non-veg), fat, and salt are used to make a bouillon. Turmeric, parsley, and coriander contribute to the flavors of this dish.

Monosodium glutamate (MSG), an additive used to improve the flavor of some dishes, may be present in some circumstances.

Dry cubes of chicken bouillon are the most common, however, you can find it as a paste, powder, or liquid as well. You can use it to flavor dumplings, curries, casseroles, and pasta dishes by stirring it into soups and sauces or mixing it with liquids to make a broth.

Picking the Best Variation of Bouillon

Since bouillon comes in different forms and variations, the following is a table to help you understand which will be the best kind for your situation.

How To Make Chicken Broth With Bouillon: Step by Step

It’s simple and quick to make chicken broth using bouillon. Aside from the mix of the bouillon variant you have, all you will need is a measuring cup and a pot. Simply follow the steps below to make this delicious and healthy.

The amount of water you need to boil depends on how much broth you plan to make. The ratio of broth to water should be 1:1. So, you should use 1 cup of water if you want to make 1 cup of broth.

Just make sure that the water is boiling before adding your bouillon cube. Fill the water into the pot and use your stove or pot to boil it.

You probably either have a bouillon mix or cubes. The amount to use for both variations should be in the ratio of 1:1.

For powder mix, 1 tbsp bouillon mix per cup of hot water is enough.

Step 3: Mix to Make the Broth

The final step is to stir the contents slowly and carefully until the bouillon cubes or particles are completely mixed and you have a steady broth.

Make sure to check for sodium levels before you get your bouillon cubes. Avoid adding a lot of salt to your dish if you are making bouillon cube broth to go with it.

Is Water and Chicken Bouillon the Same as Chicken Broth? 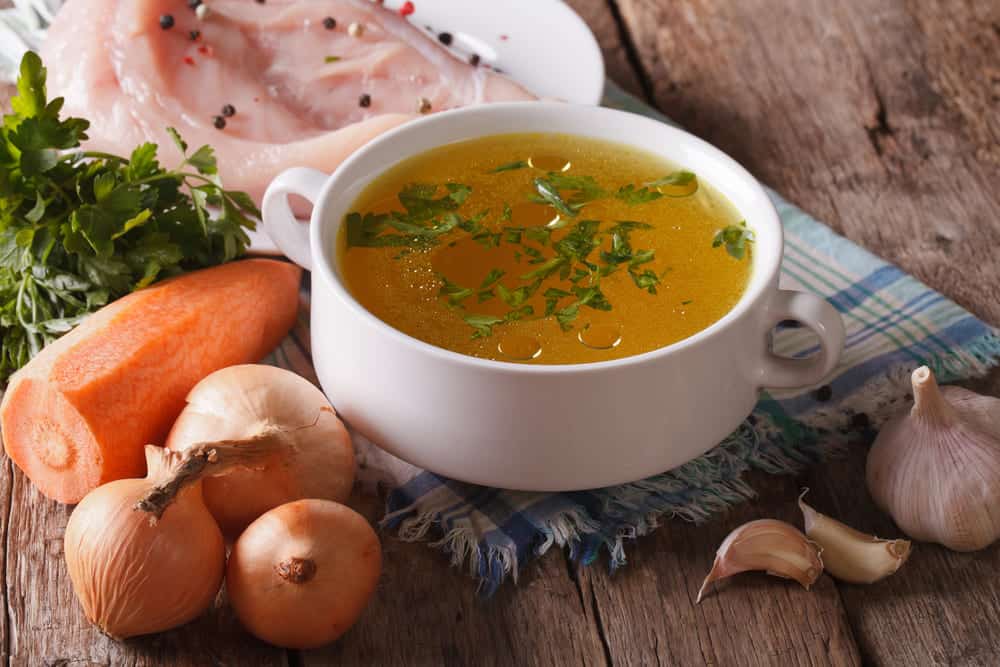 Bouillon is a concentrated liquid that has been dehydrated. The sodium content of this store-bought food is usually quite high. In general, it is not a healthy option.

Chicken broth is created by boiling a whole chicken or a carcass of bones, skin, and trim. And with no additional salt, this is the healthiest option at home.

Since one does not always have a lot of time on their hands, people use bouillon cubes to make chicken broth often.

The outcome is not very similar, though, as the broth you get from boiling a bouillon cube in water is often very salty. It needs to be balanced out to be as delicious as chicken broth made from scratch.

Can I Use Chicken Bouillon Cubes Instead of Chicken Broth?

It is best to use the two ingredients in their recommended recipes, but if you are out of options, it should be okay to use chicken bouillon cubes instead of chicken broth in a dish. You can substitute bouillon cubes or granules for broth or stock in various dishes.

The recommended measurement for adding bouillon cubes in place of water is 1 bouillon cube (or 1 teaspoon of bouillon granules) in 8 ounces of boiling water.

Since bouillon cubes can be extremely salty, use 1 cube for every 1 and 1/2 cups in boiling water to reduce the sodium.

Does Bouillon Make Broth or Stock?

The broth is a soup made from meat or vegetables and is thin in texture. It is something you can easily sip on.

On the other hand, the stock is made of simmering animal bones in water to get a thick, flavorful soup. The broth is seasoned, whereas the stock is not.

Bouillon is both, in a way. Since it is made in the form of cubes and powders, it is often called dehydrated stock and broth by chefs.

It is made out of dehydrated meat or veggie broth, so if you wish to, you can say that bouillon makes the broth. However, bouillon cube will be the same as thick and unseasoned stock.

Can Chicken Bouillon be Used for Chicken Broth?

If you don’t have any broth on hand, you can prepare a broth substitute with bouillon cubes or granules. Keep in mind that bouillon is saltier than broth, so any salt called for in the recipe may need to be omitted or reduced.

One Chicken Bouillon Cube Equals How Much Broth?

1 bouillon cube (or 1 teaspoon of bouillon granules) in 8 ounces of boiling water for every cup is the approx equivalent of one cup of chicken broth.

How Much Chicken Bouillon Per Cup of Water?

When using chicken bouillon, 1 cube or 1 teaspoon per cup of water is a good rule of thumb. Your bouillon may have more or less salt and seasonings, depending on the brand that creates it.

What is the Shelf Life of Bouillon Cubes?

When properly stored, bouillon cubes can last up to two years with all their quality intact.

Hello, I am Saurabh and I love cooking. I started this blog to help you find the right ingredients for your recipes. I hope you find this blog helpful and if you have any questions, feel free to contact me! 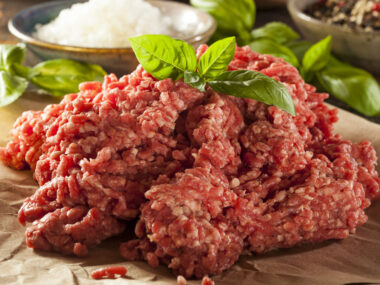 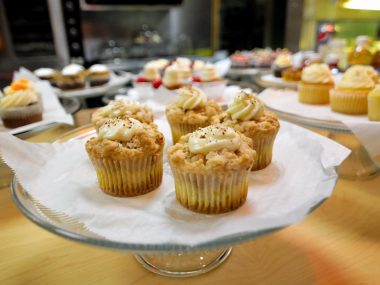 Read More
Both cupcakes and muffins are delicious and they can come in a variety of types. You can add…
Read More