Oyster sauce is a condiment with dark brown color and a combo of salty and sweet flavor. It is mostly used in Chinese, Vietnamese, Malay, Thai, and Khmer cuisine.

This sauce is made when oysters are simmered in water. Then, the juices caramelize and create a brown thick sauce with a wonderful umami flavor. But because this method of production is very expensive, nowadays this sauce is created with added oyster extracts, soy sauce, sugar, salt, corn starch, and caramel for better flavor, texture, and darker color.

If you like to cook a dish that asks for oyster sauce but you don’t have it at home, you can use some substitute to get a similar flavor to oyster sauce.

The best oyster sauce substitute is the one you make at home (recipe below). You can use your favorite ingredients and adjust the amount of salt in your dish to your flavor.

However, you can also use some of these substitutes if you’re not in the mood for preparing a homemade oyster sauce.

Vegetarian mushroom oyster sauce is made with dried shitake and oyster mushrooms. It is thinner than the regular oyster sauce but with similar color and sweet-salty meaty flavor.

You can use it in stir-fries, marinades, sauces, as a dipping sauce, or topping for meat and vegetables. As a substitute for oyster sauce, you can use the same amount of vegan/vegetarian mushroom sauce. 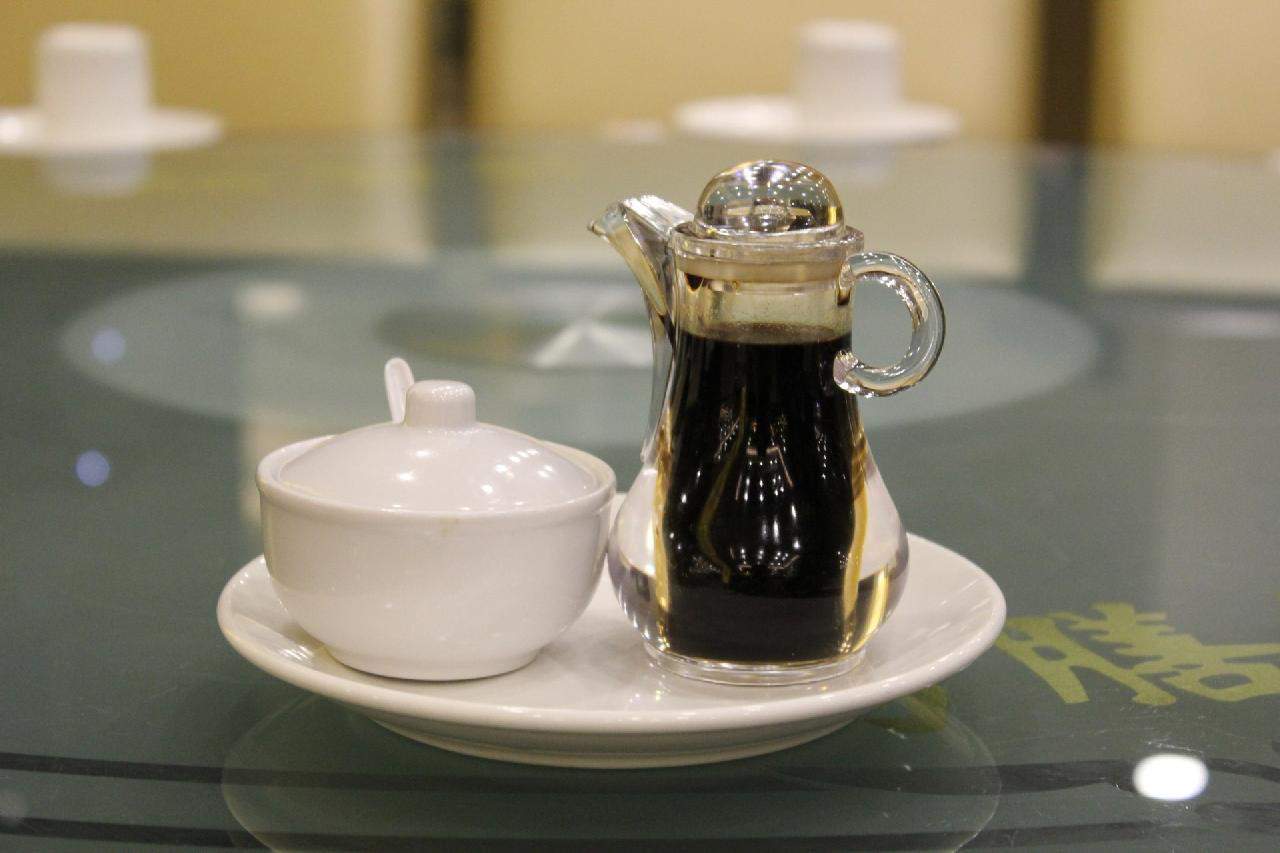 Soy sauce is darker and saltier than oyster sauce. It is made from fermented soybeans and roasted wheat, which is mixed with salt brine and brewed for a few months.

Soy sauce is with salty-sweet umami flavor with a bitter final note. It adds deep flavor and beautiful brown color to dishes like stews, soups, stir-fries, and marinades, or as a condiment at the table.

This light brown sauce is thin and salty. And it is usually used in stir-fries, dips, marinades, dressings soups, and stews.

Light soy sauce is used to improve the flavor of dishes and to add salty but not very strong soy flavor. It is made from the first pressing of the soybeans therefore it is lighter in color and saltier than dark soy sauce.

Dark soy sauce is mostly used in dishes to give them color and flavor. It is best used in stir-fries, dressings, marinades, stews, and many other dishes. For a better flavor dark soy sauce is often mixed with light soy sauce.

Sweet soy sauce is with sweet umami flavor thick texture and dark color. It is suitable for stews, marinades, sauces, as a topping and dipping sauce. 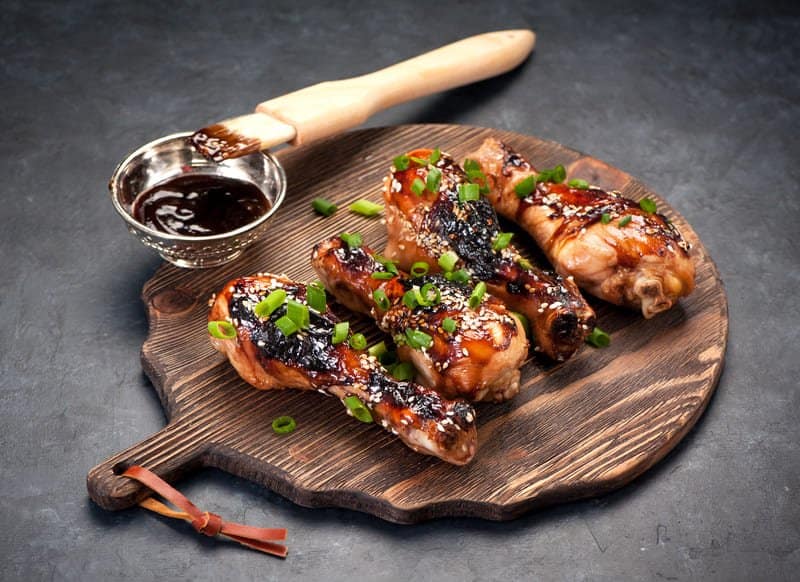 This sauce is made when soy sauce, sugar, and sake or mirin are boiled together. Ginger, garlic can be also added for a better flavor. It is mostly used as a glaze for meats and fish and as a marinade but you can also use it in stir-fries, as a dipping sauce and topping. It has a sweet and salty umami flavor and a thick texture.

Chinese brown sauce is made with beef broth or beef stock, soy sauce, oyster sauce, sugar, and rice wine. However, there are also variations with chicken and vegetable broth, and some other ingredients like garlic, ginger, chili, corn starch, and sesame oil.

It has a salty, sweet umami flavor and thick texture. You can use it in stir-fries, sauces, stews, and other dishes. It adds delicious flavor and good texture to your favorite food. 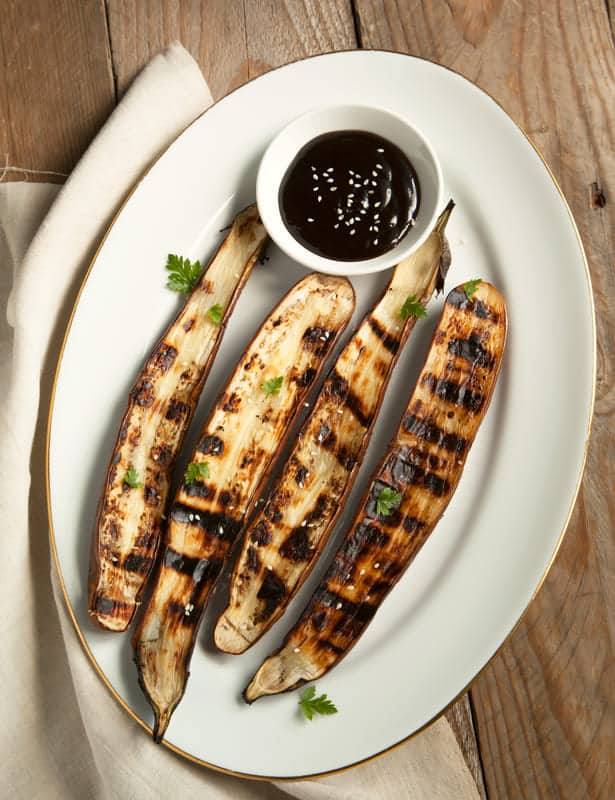 There are regional variants with other ingredients added like spices, starch, wheat, preservatives, and sesame seeds. Hoisin sauce has a dark color, strong salty, and slightly sweet flavor with a thick texture. It adds good umami flavor to stir-fries, marinades, sauces, and dips. However, it is also used as a glaze for meat. 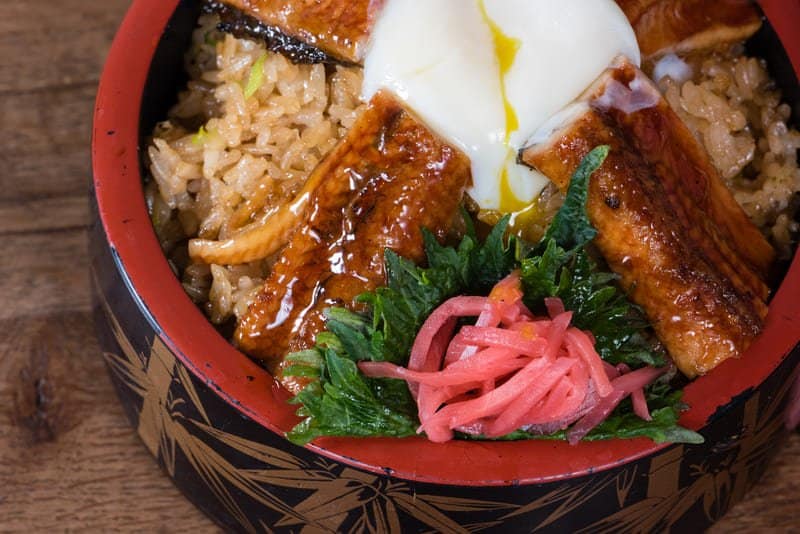 Tamari sauce is a common ingredient in different savory dishes. It adds less salty but rich umami flavor. Made from the liquid of the pressed fermented soybeans, this sauce is different from the other soy-made sauces.

It is less salty with a thicker texture than soy sauce and works well with noodles, tofu, fish, dumplings, etc. This Japanese version of soy sauce is suitable for soups, stir-fries, stews, sauces, marinades, or as a dipping sauce.

Coconut aminos are made from the sap of coconut trees fermented with sea salt. They have a salty-sweet umami flavor and works well in stir-fries, salads, sauces, soups, stews, marinades, or as a dipping sauce. They are gluten-free and suitable for vegetarians and vegans. 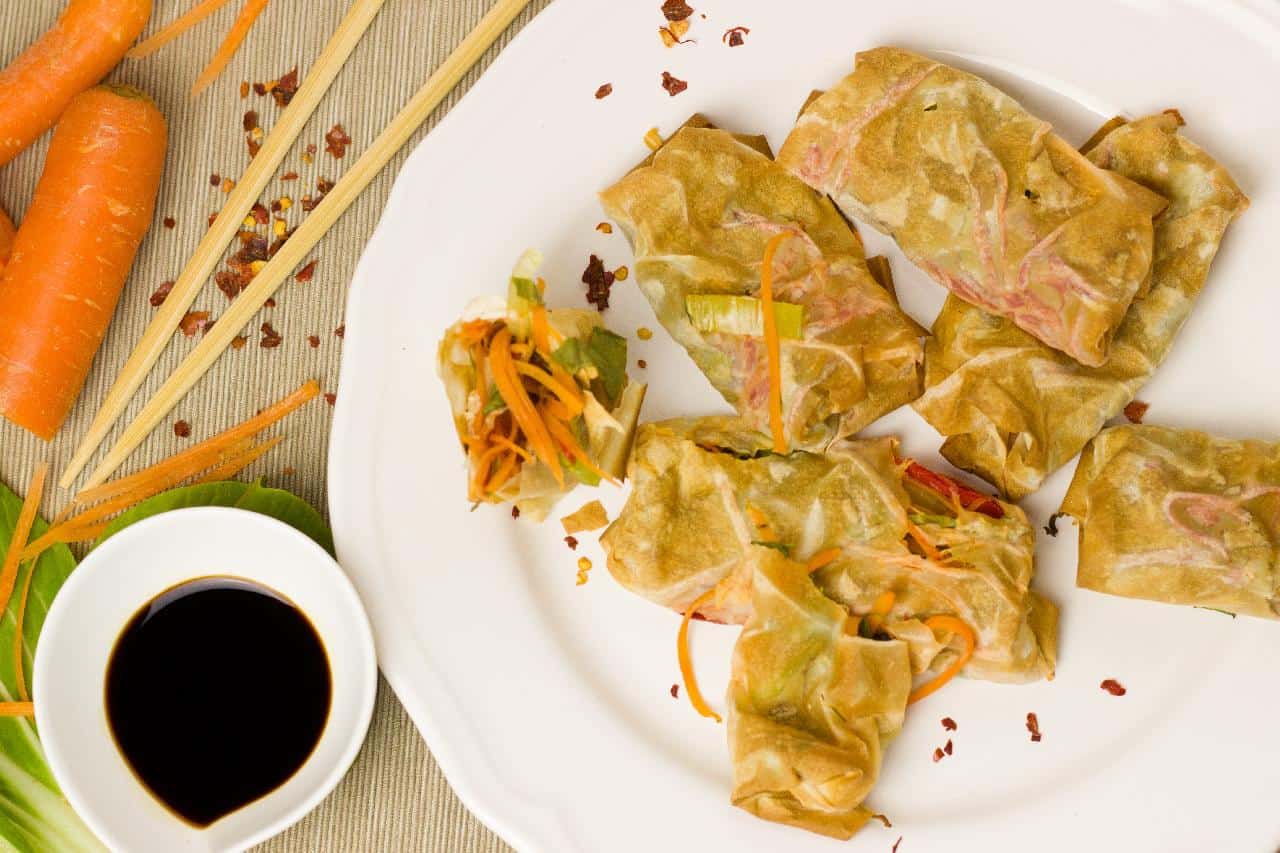 If you have a fish sauce you can also use it as a substitute for oyster sauce. Fish sauce is made from a mixture of salt, water, and fish which is fermented for up to two years. This sauce is usually made with anchovies but some other types of fish are also used.

Fish sauce is brown-red and has a thicker texture than oyster sauce. It has a salty and fishy flavor. And performs well in marinades, sauces, stir-fries, and dipping sauces. If you don’t mind the fishy and saltier flavor, you can use it as a substitute for oyster sauce. 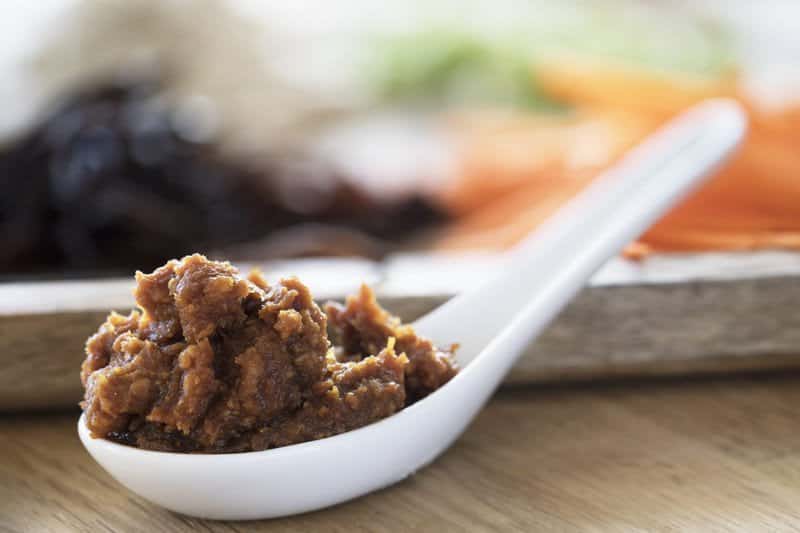 Miso paste is made from soybeans, salt, barley or rice, and koji mold. They are fermented from a few weeks to few years depending on the type.

There are many types of miso paste divided into two categories: light and dark. The dark one is fermented longer and is saltier than the light one. It is a common ingredient in stews and braises, while the light miso is used in dressings and sauces.

The flavor of the miso paste depends on the type and can be salty, sweet, or savory with a smooth texture.

How to Make Oyster Sauce From Scratch?

If you have oysters you can make an oyster sauce with just a few ingredients added.

Chop the oysters and mix them with their liquid along with the water in a saucepan. Bring the mixture to boil with occasional mixing, to prevent them to stick to the pan. Reduce the heat to low and simmer covered for 10 minutes.

Remove the pan from the heat and add the salt. Strain the mixture, and add the soy sauce. You can add a little more or less depending on your taste.

Put it again to boil, reduce the heat, and simmer for 10 minutes until the liquid thickens. The oyster sauce is ready. You can use it right away or save it for later.

Stir-fry is one of the dishes where the oyster sauce is mostly used. But you can also use it in dishes with vegetables and meat, mix it with other sauces, or use it on its own.

The high-quality oyster sauce doesn’t have a fishy taste like some low-quality ones. Oyster sauce has a nice saltiness from the oysters, sweetness from the caramelized liquid, and all flavors are mixed in one tasty sauce with an umami flavor.

This sauce can give a lot of flavors to your dish without adding too many calories, protein, or fiber. You can store your unopened oyster sauce for 1 year in the fridge. Opened one, on the other hand, is good for 6 months in the fridge.

What can I use instead of oyster sauce in a stir fry?

Instead of oyster sauce in stir fry, you can use vegetarian mushroom oyster sauce, soy sauce, hoisin sauce, or Chinese brown sauce.

Can I use hoisin sauce instead of oyster sauce?

Yes, you can use hoisin sauce instead of oyster sauce. But you will get a slightly different flavor because the oyster sauce has fewer spices and is less sweet than hoisin sauce.

Is oyster sauce and Worcestershire sauce the same?

You can use some of these substitutes instead of oyster sauce but use a smaller amount first. Because if you add too much you will get a too salty dish and unsatisfying flavor. Let us know which substitute works best in your dish. 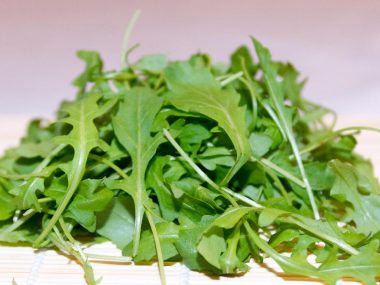 Read More
Arugula is such a perfect ingredient for salads, sandwiches, and for just anything about healthy dishes. It’s known…
Read More 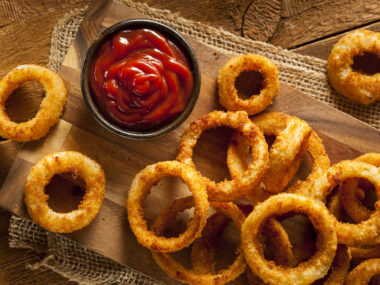 Read More
Ketchup is possibly the most famous condiment in the world. It is known for its vinegary, slightly sweet…
Read More