Ube vs Taro: Aren’t They the Same?

People tend to confuse ube and taro a lot. In reality, they are two very different vegetables. In spite of their many similarities, each one of these veggies has its own properties and taste.

This is the reason why you might not want to use them interchangeably in your dishes unless you really like them both just as much.

The main difference between ube and taro stays in their flavor. You will notice that ube is much sweeter than taro which is more nutty and starchy.

At the same time, the color of these two veggies can differ significantly too. Ube ranges in color from white to a well-defined purple shade while taro can be white or a light lavender shade.

Let’s look more in-depth at the main differences between these two veggies and how you can make the most out of each one in your dishes!

If you like these two veggies, you will be glad to know that they have plenty of nutrients you should definitely add to your diet. Both ube and taro have a rich taste and they will bring important vitamins, minerals, and even protein to your meals.

A cup of ube, or purple yum, for instance, will bring your meal 140 calories, 27 grams of carbs, 1 gram of protein, 4 grams of fiber, 0.1 grams of fat but also calcium, iron, vitamin C, and vitamin A.

A cup of taro will bring you 183 calories as well as 6.7 grams of fiber, manganese, vitamin B6, vitamin E, potassium, copper, vitamin C, phosphorus, and magnesium.

You will be able to enjoy these benefits regardless of how you prepare your veggies. But the less heat you use, the more nutrients you will enjoy.

Do Ube and Taro Taste the Same?

As we mentioned, ube and taro differ in flavor which is one of their main differences.

You will notice that ube is sweet but mellow and rich in flavor. You can also feel a milder starchy taste as you enjoy this veggie too.

When you cook ube, its texture will become softer and a little sticky while the flavor remains in the sweet range. Some people prefer to enjoy ube cooked thanks to its softer texture.

Taro on the other hand has a stronger, starchy taste to it combined with a nutty, earthly flavor but it is still a sweet vegetable.

The flavor of taro is fairly similar to the flavor of sweet potatoes. Therefore, if you like sweet potatoes, you will definitely like taro too. When you cook taro it will also become softer but drier too and it will have a grainy texture.

In general, ube is known as a sweet veggie that is very similar to sweet potatoes but with a more nutty flavor. Ube is used in a variety of desserts thanks to this sweet flavor and its soft texture when it is cooked.

There are dishes that will give the ube a vanilla taste, especially in desserts that require mixing ube with milk or a type of dairy. The ingredients and seasonings you add to your recipe along with the ube will have a direct impact on its flavor too.

Are Taro and Yam the Same Thing?

Many people think that yam and taro are the same due to their similarities. But yams are originated from Africa while taro comes from Asia. They are both starchy vegetables but not the same kind.

There are over 150 types of yams with different colors that are cultivated all over the globe. The colors of yams can vary from white to purple just like taro, and they can have a similar texture to taro as well.

Also, the taste of yams is more neutral and a lot less rich in flavor compared to taro.

As a matter of fact, many chefs prefer to use yams in dishes where they don’t look for a rich taste as these veggies will get mainly the flavor of the other seasonings.

Taro milk tea can be bubbly or not but in both versions is very tasty. For many people, this drink is considered to be a comfort drink. There are several recipes for taro milk tea, however, the traditional one calls for taro powder as the main ingredient.

Other ingredients of taro milk tea include black/green tea leaves, milk/creamer, honey, ice cubes, and water. As you can see, there is no ube in the initial recipe of this drink.

Thanks to the similarities in taste between taro and ube however, the drink might seem to have an ube flavor, especially thanks to the added honey.

If you prefer ube instead of taro, you will be glad to find out that you can replace the taro powder in your drink with ube powder.

Both taro powder and ube powder can be found in stores but you can also make them at home by grinding the veggies and drying them properly.

Is Ube a Filipino Flavor?

Yes, ube comes from the Philippines originally but nowadays it got popular in many parts of the world. Ube is used in a variety of dishes and it remains very popular in Filipino cuisine.

Today, ube is also cultivated in Australia, the US, Africa, and South America. Unfortunately, this veggie isn’t widely available in Europe. However, you might be able to find ube powder or products that contain dried versions of it.

Purple yam is another name for ube. The two vegetables are comparable to taro but not the same. Taro just as purple yam, can be used in both sweet and salty dishes. However, due to its milder sweet taste, taro is better in main courses rather than desserts.

On the other hand, the purple yum being sweeter can be used successfully in all kinds of dishes from savory ones to ice creams and even cakes.

You will notice that taro doesn’t have such a strong purple shade as the purple yam or ube. But it still brings a beautiful lavender tint to your food.

Using these veggies in your food is not much different from using potatoes or pumpkins. As a matter of fact, ube will resemble pumpkin more in terms of texture. It becomes even more similar when it is cooked.

Baked or fried ube gains a soft and sometimes sticky texture and its sweet taste might intensify too. You can use ube to make delicious ice cream flavors, cakes, cookies, and sweet toppings.

Equally, ube can go great with salty dishes as it will obtain a lovely flavor from the other ingredients you add to your recipe.

Cooking taro is similar to cooking ube and you can use it in both sweet and savory dishes. However, this veggie will go better in salty dishes as it is nuttier in flavor and has an earthly taste with a mild sweetness to it.

However, taro is known for being the key ingredient in taro tea milk which is appreciated all over the world.

Both ube and taro should be carefully washed and peeled before you use them in your recipes. There will be dishes that allow you to leave the peel on but this is rare and in most cases, you will remove this part.

Using ube and taro in the kitchen is becoming more and more popular in many countries. These two veggies can offer you delicious desserts but also very tasty savory dishes that you will love to enjoy with your friends and family.

It is essential to know the difference between these two veggies in order to use them correctly in the kitchen. A kind of advice would be to try and purchase your ube or taro from an organic source and as fresh as possible.

Their taste and texture are best in these conditions and you are not taking the chance of ruining a great dish by simply using a poor quality ube to it. 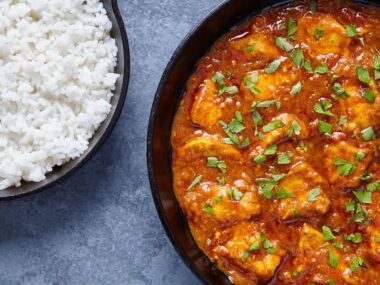 Read More
Both butter chicken and tikka masala are tasty and similar-looking dishes. However, if you tried both of these…
Read More 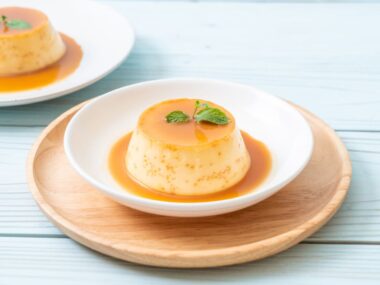