Bruschetta is a popular  Italian meal that consists of grilled bread with garlic which has a garnish of olive oil and salt. Garnish can be done with tomatoes, cheese, cured meat, etc.

In Italy, Bruschetta is prepared with the help of a brustolina grill. Bruschetta is made from Pagnotta bread. This bread is the best bread to make a Bruschetta.

Ciabatta is the second-best bread from which bruschetta can be made. Ciabatta is a sturdy and crusty bread that can hold the soft toppings of tomatoes, mozzarella, etc.

In today’s article, we will be looking at the different types of bread that can be used to prepare a delicious bruschetta, so let’s dive right in.

Bruschetta is one of the most delicious and loved appetizers of all time and bread is a significant ingredient in this meal. However, if you don’t have the Pagnotta bread at hand, you can use the ciabatta bread or even the slices of egg.

The egg taste will mix up with the recipe making it even tastier. The bruschetta you make out of the eggplant will also be very beneficial in terms of health.

However, if you are using the ciabatta bread, you are likely to get the desired results as this type of bread is crispy with a firm build, so it is perfect for bruschetta. It can even sustain the softer toppings of tomatoes, mozzarella, cheese, cured meat, etc.

Now, let’s take a look at some of the best loaves of bread that you can use to make Bruschetta in Italy and elsewhere. 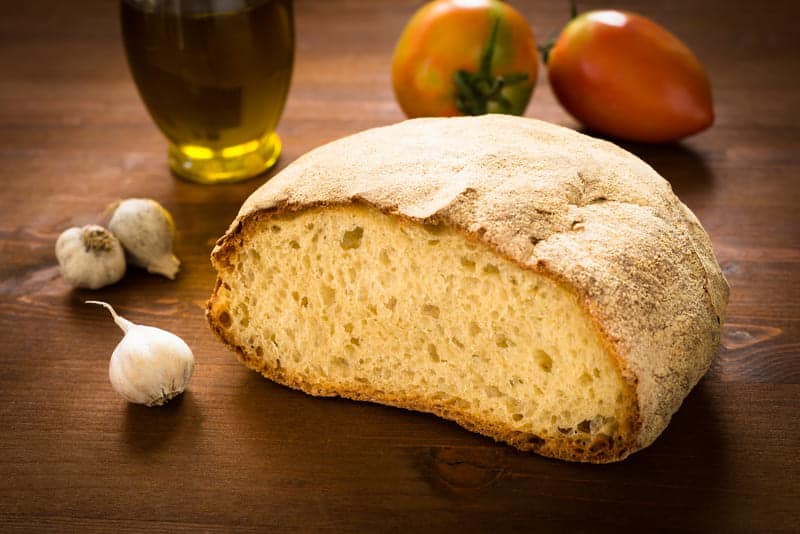 The Pagnotta bread is considered to be the best bread for the making of a Bruschetta. It is made of an Italian sourdough starter and durum wheat flour.

The Pagnotta bread is baked in a wooden oven. Note that this bread is rarely found outside Italy, hence people keep looking for other alternatives. 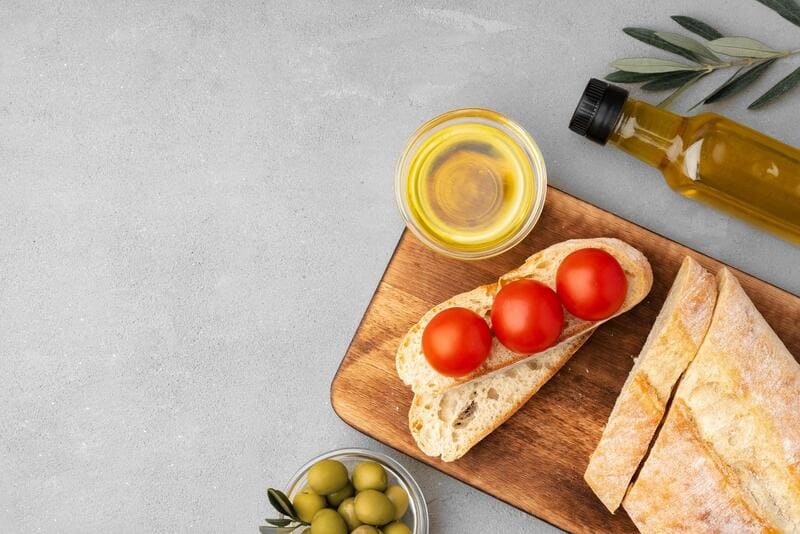 The Ciabatta Bread is deemed to be the second-best bread that can be used to prepare a delicious Bruschetta.

This bread is sturdy and crispy, so it can hold generous softer toppings of mozzarella, tomatoes, cheese, or anything that you would wish to put. 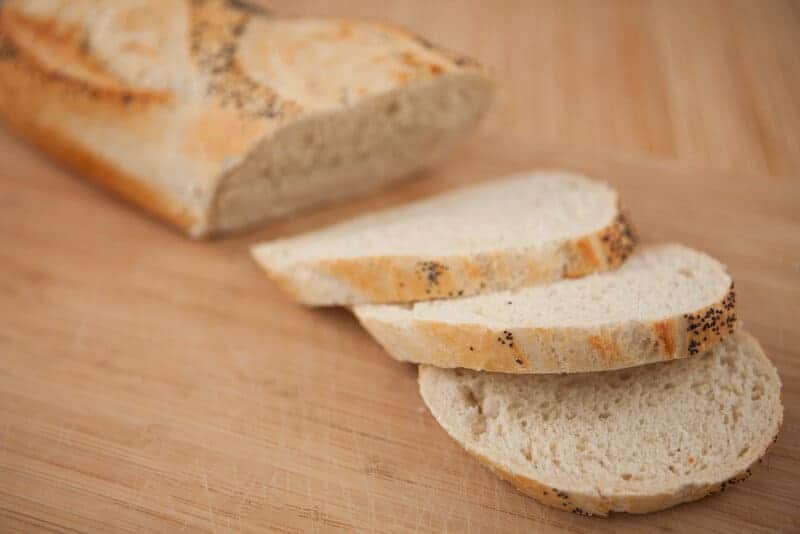 A Baguette is a long, thin type of bread originating from France.

It consists of basic lean dough. Moreover, it has a distinguishable crust that can be differentiated from other pieces of bread easily. It is long and skinny in texture, so many people use Baguettes to make Bruschetta.

What Bread is Bruschetta Made From?

Bruschetta is initially made by toasting slices of bread known as Pagnotta. Pagnotta bread is made up of an Italian sourdough starter and durum wheat.

This bread is then baked in a wooden oven. Moreover, since it is native to Italy, it is rare to find it in other parts of the world. Hence, where Pagnotta bread isn’t available, you can use the ciabatta bread. This bread is solid and crispy and can sustain tomatoes, meat, etc.

Any rustic bread with a light flavor and good crust is considered suitable for bruschetta. For instance, Pagnotta and Ciabatta, both these loaves of bread, have these qualities.

If you’re not a resident of Italy and wish to make bruschetta at home, then try to obtain Italian bread from the market because that will provide you with the best results.

What Bread is Similar to Bruschetta?

Bruschetta bread is an Italian appetizer. The word bruschetta originated from “bruscare,” which means “to roast over coals.”

Bruschetta is a grilled garlic-rubbed bread topped with tomatoes, cheese, mozzarella, and various other toppings. It has become prevalent worldwide.

Bruschetta bread can be made of many different types of loaves of bread. Ciabatta and Pagnotta bread are the best ingredients to make this Italian dish.

Ciabatta and Pagnotta bread have a muscular build, so they’re rustic and crispy. And these aspects make them the best option for making Bruschetta.

Is Bruschetta Made From Ciabatta?

Ciabatta is a rustic bread that is appropriate for making the Italian meal bruschetta. It is a solid and crispy bread, which makes it the best option for bruschetta.

The key to making a good bruschetta appetizer is to use soft and crispbread simultaneously—a bread that can sustain the toppings of tomatoes, etc.

The main ingredient of bruschetta is bread. It is an Italian dish, so the natives use the Pagnotta bread, which provides the best results, but Pagnotta bread is not available pervasively.

Ciabatta bread, on the other hand, is available at many stores. It is native to Italy, hence it should be used.

At various places where Pagnotta bread is not available, chefs use eggplants or ciabatta as a substitute.

Bruschetta is made of ciabatta bread in various places to answer the question. Ciabatta is a firm bread, and thus it can be used as a substitute for Pagnotta bread.

Is Bruschetta Made From Baguette?

A baguette is a form of French bread. It is a long loaf of bread of approximately 5 centimeters. The length sometimes goes up to 1 meter.

A baguette is very different than ordinary bread because of its size and shape difference. However, the bread is very soft on the inner side and has a thin, crisp crust.

How to Choose a Baguette?

First of all, you should ensure that the baguette you choose is crisp and thin.

You can determine the freshness of the bread by running your hand through the bread’s crust. If it makes a crisp sound, then the bread is fresh.

How to Store Baguette?

Baguette is made with four ingredients, namely salt, yeast, flour, and water. Hence, it is best consumed on the same day it is made.

Baguette which has been left can be stored in paper bags or foil papers so that they can be consumed even the next day.

You should avoid refrigerating the bread. But, if you wish to store it for a more extended period, you should wrap the bread in foil and deep freeze it.

Bruschetta can be made from baguettes too. And Baguette can be used in place of rustic bread to make a bruschetta.

Baguette is a soft bread on the inner side and has a thin, crisp crust. To make bruschetta, we need crispy bread, and a baguette fulfills that need.

Is Bruschetta the Bread or the Topping?

To be concise, the word bruschetta means bread, and it does not imply any toppings. Bruschetta refers to the bread part only.

Everything that is included in the topping or spread on the bruschetta as a garnish is different from the meal.

Bruschetta is a well-known and adored Italian appetizer made of Pagnotta bread topped with tomatoes, cheese, mozzarella, cheese, cured meat, and more.

Bruschetta can also be made of ciabatta bread which is equally soft and crisp, just like Pagnotta bread.

Ciabatta bread is generous with different kinds of toppings. It can include toppings of tomatoes, cheese, mozzarella, cured meat, and more.

So, bruschetta is the part of the bread eaten and enjoyed by the Italian people. Bruschetta has come to fame even in the USA, and because of this, the stores in the USA have ciabatta bread.

What’s the Difference Between Crostini and Bruschetta?

The similarity between Bruschetta and Crostini is that both are prepared with bread, but the key difference between the two meals is that they are made with different types of bread.

Crostini are roasted and sliced from around smaller, fine-textured bread, which looks like a white bread baguette. The crostini, which are small, have a variety of toppings.

Crostini can be topped with figs, goat cheese, black olive paste made of sun-dried olives, and finely chopped mushrooms sprinkled with black pepper.

Even a bruschetta is open to different kinds of toppings like basil and ripe tomatoes, puree of fresh beans and garlic, sun-dried tomato spreads, and more.

Crostini means little toasts in Italian. Crostini are little toasts of bread that are thin in size and are brushed with olive oil.

If we summarize, then we find that Crostini and Bruschetta have two significant discrepancies, which are:

Style and Type of Bread

The Crostini uses a baguette type of bread, while the Bruschetta uses a more giant bread of the sourdough type.

Treatment of the Bread

If you wish to make Crostini, then you need to slice the bread thinly before you start to grill or toast. On the other hand, while making a bruschetta, one needs to slice sourdough-style bread thickly before they toast it. Afterward, the bread is rubbed with garlic.

For those of you who do not know the difference between the two Italian appetizers, this may feel like minute details.

But, people who have grown up in Italy, know the significant differences between the two bread dishes. Many people mistake a Crostini for a Bruschetta, but they are highly different from each other.

Crostini is treated as a French dish because a baguette is used to make it, while for a Bruschetta, an Italian bread, Pagnotta is used.

Crostini can be topped with a variety of food items. Toppings such as cream cheese, smoked meats, salmon, prawns, and caviar are trendy. 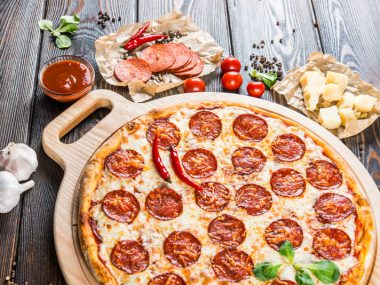 Read More
If you are a meat lover then you probably love meaty toppings too. This could especially be true…
Read More 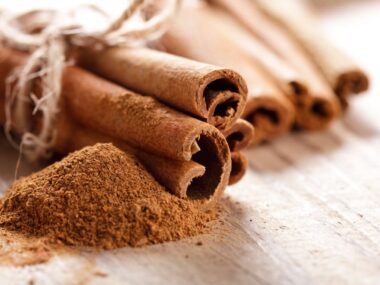