Sometimes, it happens that people are craving sausage for breakfast or lunch but forget to take it out from the freezer. Does this happen with you too? Well, do not worry, this article can help!

You can cook most of the frozen sausages directly without thawing them but this depends on the instructions mentioned by the manufacturer on the package. Some sausages might require thawing.

So, if your sausage can be cooked directly, let us see how you can do it using a stove, oven, and air fryer. Additionally, we have also tried to answer a few common queries people have in regard to cooking sausages.

Can I Cook Sausages From Frozen?

You can directly cook sausages from frozen but be sure to check the details mentioned on the sausage package.

Some manufacturers want you to take the sausages out from the freezer and thaw them before cooking. Here, it is advisable that you follow the pack instructions carefully.

However, there are other brands that are fine with directly putting them on the stove. Or in the oven, without thawing them.

How To Cook Frozen Sausage On The Stove?

Take the sausages out from the freezer and add them to a small pot or saucepan. Then, fill the saucepan with water and cover the lid.

Turn the stove to a low flame and let it boil for 10 to 15 minutes. Check that the sausages have been perfectly cooked. If not, boil them for a few more minutes.

Heat a non-stick pan and add some oil to it. Then, take the boiled sausages and dry them with a napkin or towel. After that, put the sausages in the pan and heat them on a low flame.

Let them cook for five minutes, then toss them to the other side. Cook evenly from all sides until the desired color is received.

If you do not wish to pan-fry the sausages, there is another way you can cook them. You can try grilling the sausages after boiling them (as mentioned in the previous steps).

Take the sausages out from the boiling pan and dry each of them with a napkin and towel. Take a grill pan and brush some oil on the pan. Heat it on a high flame.

Then, place the sausages on the pan and cook each side evenly for five minutes on a medium or low flame. Make sure you get the desired golden-brown color before switching off the stove.

Therefore, this is how you can cook frozen sausages on the stove in case you have forgotten to thaw them. Now, let us take a look at other methods of cooking frozen sausages.

How Long To Cook Sausages From Frozen In Oven?

Generally, the cooking time of a frozen sausage depends on the thickness of the sausage. Thus, if you are using thicker sausages, they will need more baking time as compared to thinner ones. However, a normal sausage takes about 30 minutes to cook in an oven.

Here is how you can cook the frozen sausages in an oven without too much trouble.

Pro tip: Do not leave the sausages in the oven or on the stove for too long. If you are unsure if they have been cooked completely or not, take them out and cut it from the middle to check.

If you follow this guide, you can enjoy a perfect breakfast, lunch, or dinner without having to go through the entire process of thawing.

How To Cook Frozen Sausage In An Air Fryer?

If you are looking for a quicker way to make frozen sausages, cooking the frozen sausages in an air fryer is the method for you! It will make equally delicious sausages like the previous methods.

Here is how you can use an air-fryer to cook frozen sausages:

Add the sausages to your pasta, rolls, or gravy. You can prepare various dishes for get-togethers, parties, and other events super easily with the air-fryer technique.

Is It Safe To Cook Sausages From Frozen?

It is safe to cook sausages from frozen. Just follow the instructions as mentioned and your sausages will turn out perfect. However, note that you should not eat frozen sausages that were once defrosted and frozen again.

Just like with every other food, freezing something that was already frozen and defrosted in the past is not good. It loses taste and texture and might not turn out as you expected!

Can You Cook Chicken Sausages From Frozen?

You can cook frozen chicken sausages as well just like other sausages. You can put them on the stove, cook them in an oven, or even grill them. In fact, you can BBQ the chicken sausages if you want! Just follow the steps mentioned above and you are good to go!

Do You Need To Thaw Sausage Before Cooking?

Although not necessary, some brands suggest thawing sausages before cooking. In these cases, it is advised to follow the instructions to avoid any damage to the sausages. If you want to thaw the sausage before cooking, pick one of the following 3 methods.

This is the most straightforward way to defrost sausages.

Take the original packaging and put them in a bowl of cold water. Cover the bowl with a lid and leave it for thirty to forty minutes. Sometimes, it might even take an hour to completely defrost.

In case, you do not have the original packaging, use a plastic bag. Add the sausages into it and seal it tightly. Then, put them in the bowl of cold water as directed.

Also, do not use hot water for thawing the sausages. Hot water can increase the temperature of sausages and encourage the growth of bacteria.

Method 2: Defrosting In The Microwave

This is the fastest method to defrost frozen sausages.

It will take nearly five to six minutes to completely defrost. However, the sausages thawed using a microwave must be consumed within a day as they tend to have a stretchy texture.

Method 3: Defrosting In The Refrigerator

If you have at least a day until you cook sausages, this is the method you can go for.

Remove the sausages from the freezer and put them in the refrigerator in the original package or plastic bag. It will take nearly 24 hours for the sausages to be entirely thawed. Although it is the longest procedure, it is the safest way to thaw the sausages.

Once defrosted, the sausages must be consumed within a day or two to avoid any damage to their taste and quality.

Apart from these three ways, some people tend to defrost sausages at room temperature. However, we highly advise against this method as it offers an ideal condition for bacterial growth in sausages. 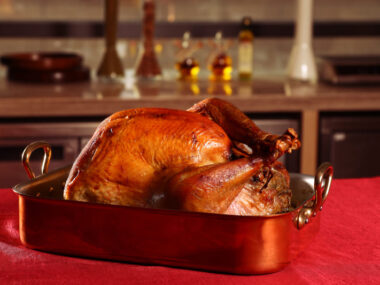 Read More
Everybody wants to give their guests the best Thanksgiving dinner possible. And, turkey is an essential part of…
Read More 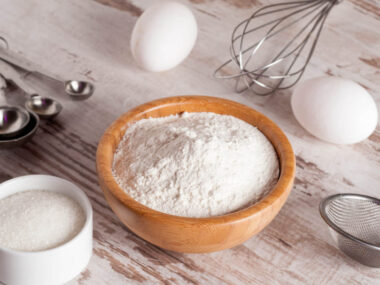